Anti-vaxxers give jabs of their own 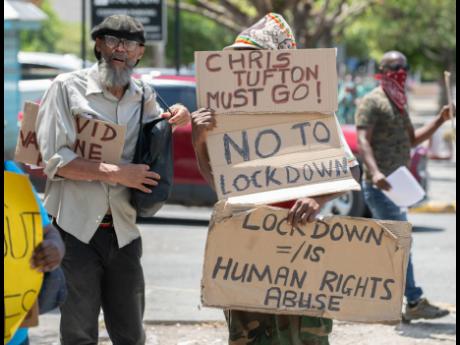 Gladstone Taylor/Multimedia Photo Editor
Anti-government crusader Lloyd D’Aguilar and anti-vaccination protesters demonstrate in the vicinity of the Ministry of Health and Wellness’ headquarters in New Kingston on Wednesday. 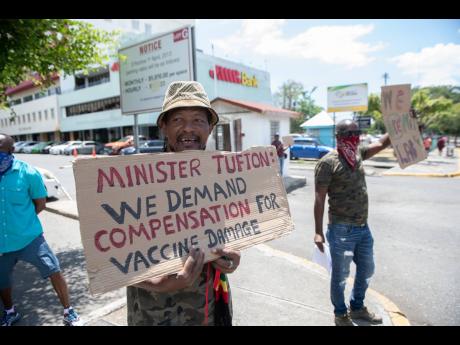 Gladstone Taylor/Multimedia Photo Editor
Anti-vaxxers protest in New Kingston on Wednesday. Jamaica is targeting the inoculation of two-thirds of the population by March 2022 to achieve herd immunity against the novel coronavirus.
1
2

Despite the initial fear of contracting COVID-19 and the dreaded stigma that plagued their communities following state-ordered lockdowns last year, many residents of York and Bamboo River in St Thomas are adamant that they will not be taking the vaccine.

Immunisation activities kicked off in the parish on Wednesday, March 10, with several members of the health sector lining up to take their first dose of the Oxford-AstraZeneca vaccine.

While the inoculation drive has been formally extended to the elderly population, many people have been shaking their heads at the invitation.

Chris Bennett of Bamboo River shared that he is more alarmed by the side effects associated with the vaccine than the stigma of a lockdown.

“Me not taking it. We a hear too much bad things about the vaccine weh a make we ‘fraid. Mi hear that you can get all blood clots, headache, and dem things deh when you take it,” he said.

Bennett was referencing the pause by several European countries on inoculation after blood clots were identified in a few dozen persons. However, immunisation has been resumed after investigations by the World Health Organization and the European medicine regulator indicated that the vaccine had no causal effect on the blood clot cases.

Dr D’Oyen Smith, medical officer of health for St Thomas, said that fever, headache, a rash, or pain at the injection point site were among the side effects associated with vaccines.

NO CAUSE FOR CONCERN

Smith, who was addressing councillors during this month’s meeting of the St Thomas Municipal Corporation, said that these reactions were generally mild and not a cause for concern.

“You don’t need to worry about this. This is a normal reaction, and if you look at children when they get vaccines, a lot of the time when they go home for the night, they are miserable, irritable, and you can’t even touch them,” he advised.

Smith said that vaccine candidates should take Panadol to counter those symptoms.

Minister of Health and Wellness Dr Christopher Tufton has also defended the safety of the serum.

“The science of immunisation is that it saves lives. It has helped us as mankind to develop and overcome major obstacles in terms of diseases,” said Tufton.

“As a country, we have been immunising our population for a long time. It is what we used to eliminate polio, control measles, chickenpox, mumps, significantly preventing premature deaths and allowing life expectancy to be what it is today, which is 74 years for men and 76 years for women.”

The health minister lamented the growing lobby of vaccine hesitancy, globally and locally, which could stymie Jamaica’s target of two-thirds inoculation for herd immunity against the coronavirus by March 2022.

That ambition could be further derailed by news on Wednesday that India has halted exports of the Oxford-AstraZeneca vaccine because of a spike in infections in India.

Jamaica is one of 190 countries sourcing supplies of AstraZeneca under the COVAX Facility.

The lobby by anti-vaxxers remains a serious concern for Tufton.

“Unfortunately, there has been a growing voice in the world ... promoting these conspiracy theories ... . Nonsense!” the minister said, emphasising that the Holness administration would only procure vaccines approved by the WHO.

But over in York, St Thomas, resident Leon Barrett shared that he is trusting the decades-old shot he got as a child to protect him against the new coronavirus.

“I got a vaccine from mi a youth, and from that, mi never catch pink-eye, measles, chickenpox, chikungunya, or anything. This vaccine cover me right through,” he said.

Barrett, who is in his 50s, said that he was not perturbed by the imminent imposition of three consecutive weekends of lockdowns that will begin this Saturday.

“Lockdown don’t trouble me no more. It done get to mi brains already to come off the road by 8 p.m. If the Government not even want to open the country right now, it nuh trouble me because as long as mi a earn, mi save more,” he said.