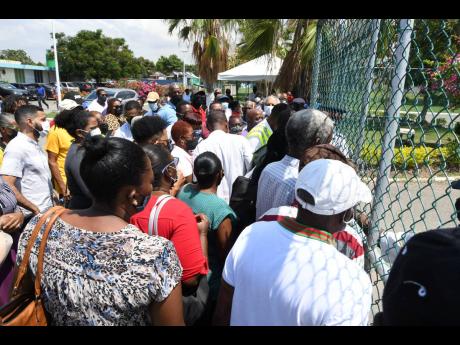 Rudolph Brown/Photographer
A crowd swarms the gate of St Joseph’s Hospital in Kingston waiting to get the COVID-19 jab during the vaccination blitz on Monday. 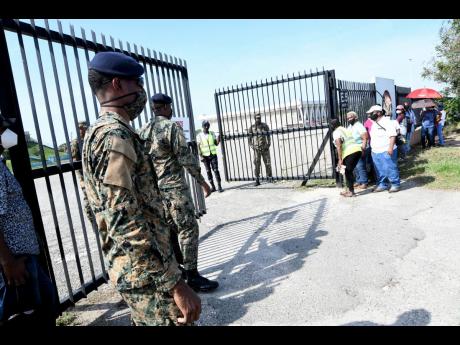 Rudolph Brown/Photographer
Soldiers man the gates of the National Arena, site of a vaccination blitz on Monday. 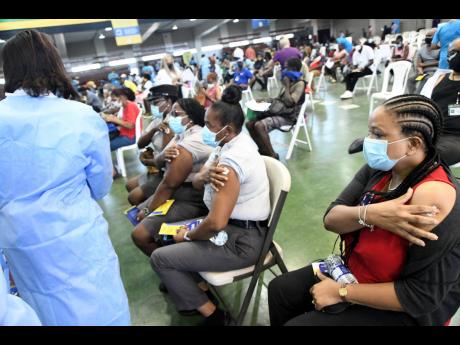 COVID-19 vaccination operations at St Joseph’s Hospital in Kingston descended into confusion on Monday morning in stark contrast to the National Arena, where soldiers manned lines and maintained order.

Waves of Jamaicans have turned out at immunisation sites across the country in a four-day vaccine blitz targeting 50,000 people. Even the National Arena started turning away droves three hours before the 8 p.m. closure after it became apparent that the hundreds already inside would take some time to be processed.

Departing from the benchmark of 60 years and older, the Ministry of Health & Wellness expanded vaccination to persons over 50, as well as 40-year-olds with underlying illnesses. Transport workers, government employees, and journalists were also added to the list.

While Arena vaccine candidates waiting to be inoculated quietly passed the time while seated under tents, a crowd amassed at the gates of St Joseph’s Hospital in Vineyard Town.

As the vaccine-hungry crowd bellowed demanding to be served, an unidentified healthcare worker sought to calm tempers and answer their questions under the watchful eye of a policeman.

David Samuel, who had turned up for a 10 a.m. appointment, was angry that the system had been abandoned in favour of the issuance of tickets on the spot. He believes that change contributed to the confusion and disorder that prevailed, with social distancing not being observed.

“You come and you have to stand up in a line, not even a line, you have to mingle around. Now people come after you and going get number before you because there is no line, no organisation,” Samuel said.

By that time, the healthcare worker, having failed in her attempts to establish an orderly system of registration, came outside the gate seeking to restore order.

Persons with appointments at some health centres were rerouted to the Arena.

“All of us just have to be considerate. ... We are not turning away anybody. Everybody is going to get through,” she said as the crowd settled down.

St Joseph’s Hospital, which is minutes from the army headquarters of Up Park Camp, did not have any soldiers on duty assisting in the vaccine roll-out.

At the Arena, persons who turned up from as early as 7 a.m. expressed unease that they had not received registration forms almost two hours later.

But Dunstan Bryan, permanent secretary in the Minister of Health & Wellness, told The Gleaner shortly before 9 o’clock that proceedings were on track and dismissed reports that delays were linked to logistical problems.

“No, that’s not true. We supposed to start at 10 o’clock ... . We just issued the (registration) forms and we have more than enough, so there are no logistical issues,” Bryan said.