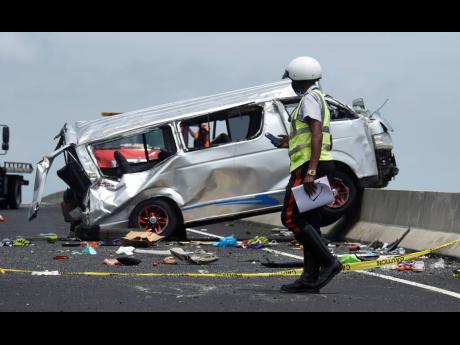 Nicholas Nunes/Photographer
A policeman walks by the Toyota Hiace minibus that was involved in a crash on Highway 2000 on Monday. Five people were killed in the collision. 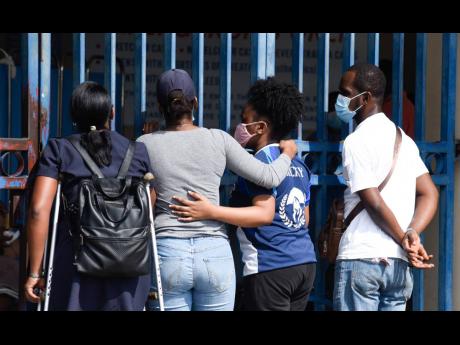 Nicholas Nunes/Photographer
Family members of a passenger on the ill-fated bus that crashed on Highway 2000 anxiously await news about their loved one at Spanish Town Hospital on Monday. 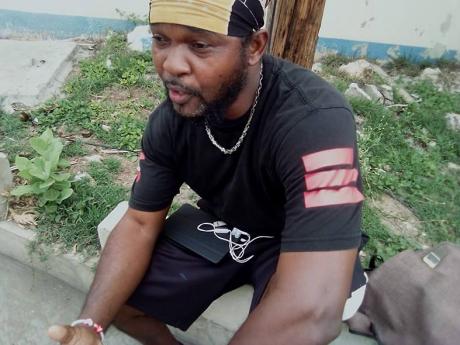 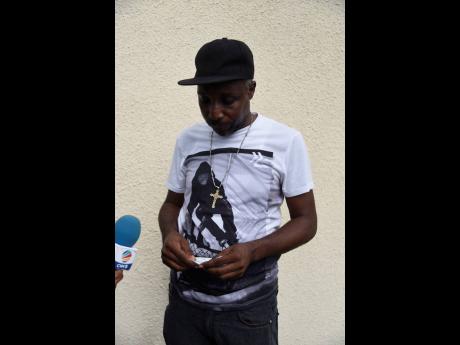 Nicholas Nunes/Photographer
Paul Pryce, brother of Derrick Pryce, who was hospitalised on Monday. He was travelling to Kingston after having boarded the bus in Mandeville.
1
2
3
4

Moments before bodies were flung on to the asphalt in a macabre canvas of blood and gore, the driver of an ill-fated Toyota Hiace minibus had been warned of ominous sounds that foreshadowed the carnage that would unfold late Monday morning. The...

Moments before bodies were flung on to the asphalt in a macabre canvas of blood and gore, the driver of an ill-fated Toyota Hiace minibus had been warned of ominous sounds that foreshadowed the carnage that would unfold late Monday morning.

The collision with a truck along the east-west corridor of Highway 2000 left five persons dead – two men and three women – and 10 others suffering a range of injuries. The vehicle ended up on a median after overturning several times.

It was the deadliest crash in Jamaica in 2021.

There were 115 crash fatalities up to April 12 in 2020, according to data issued by the Road Safety Unit at noon on Monday, four fewer than the 111 registered during the corresponding period this year. But that data would not include the multi-fatality crash on Monday.

Sherka Carter, who was on her way from Mandeville to Kingston, told The Gleaner that passengers had alerted Fowler to strange sounds coming from the vehicle. She still sees replays of the horrific scene of motionless bodies, two male and two females, lying on the pavement, as injured persons groaned in agony.

“He slowed down and listened, and then said there was nothing wrong, and increased his speed. Then we heard a loud sound and the bus got out of control, hit a truck in front of it, and flipped about three times,” Carter said.

“I am very lucky to be talking to you,” said the survivor, who was released Monday afternoon after receiving treatment for injuries to her leg, shoulder, and back.

The driver, Dwayne Fowler of May Pen, Clarendon, was among those rushed to the Spanish Town Hospital in serious or critical condition.

His siblings, who were at the hospital anxiously awaiting news of his status, declined to comment.

O’Neil Montague, who was at the hospital trying to get word on his sister, Cornelia Montague, got the heartbreaking news that the mother of two was among the deceased.

Cornelia, he said, rarely travelled outside of her home town of Mandeville, Manchester, but had taken the bus trip on Monday to clear goods at the wharves after getting a “runaround” for two weeks.

“That’s why she was on that bus going to get the goods cleared,” he told The Gleaner.

“The last conversation I had with her this morning before she set out was that she was borrowing some money because the price tag on the goods keep going up. It is so sad. ... I am just trying right now to null the pain,” he said.

The accident occurred about 11:10 Monday morning.

Janelle Maitland, 20, who had visited family members in Mandeville and was returning to Kingston, never made it home.

Her father, Dwayne Maitland, could not control his emotions as he awaited news of her condition at the Spanish Town Hospital. Janelle sustained head injuries and internal bleeding, her father said.

“They are trying to stabilise her, so that she can be transferred to the Kingston Public Hospital,” he disclosed.

Derrick Pryce, who had gone to a private doctor after sustaining injuries to his right side, back and chest, was taken back to the Spanish Town Hospital after complaining about excruciating pain.

“When him call me just after the crash, I told him to get to the nearest hospital, which was Spanish Town. Him seh him a feel a lot of pain and him feel something running down inside of him,” Paul Pryce said of his brother, who hails from Balaclava, St Elizabeth.

Paul said that his brother had reported that an infant flew from the arms of a mother into his lap when the vehicle overturned. The child was unhurt but the woman sustained injuries, Derrick Pryce reportedly told Paul.