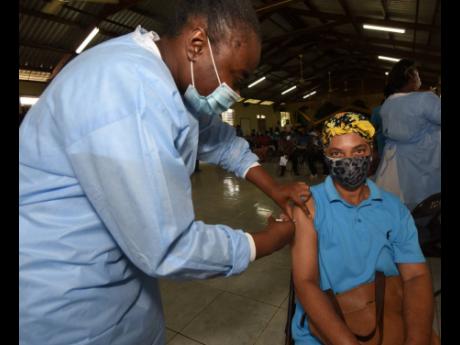 Ian Allen/Photographer
Gloria Roberts was the first person to get the COVID-19 jab from midwife Odene Wynter (left) when vaccination restarted shortly before 3 p.m. on Tuesday at the Holy Trinity Anglican Church in Linstead, St Catherine. The centre ran out of vaccines early in the morning and persons had to wait for up to seven hours to get their shot. 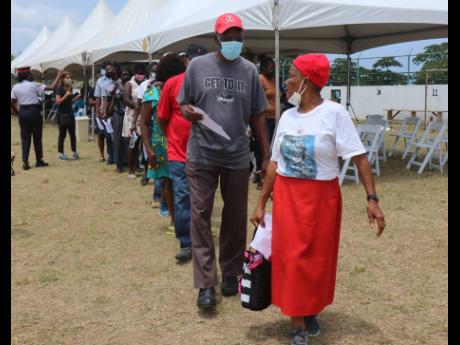 Ashley Anguin/Photographer
Persons waiting in a line to get vaccinated against COVID-19 at the Hopewell Sports & Community Centre in Hanover.
1
2

In a shot across the bow directed at world powers like the United States, Prime Minister Andrew Holness cast Jamaica’s mass vaccination of more than 75,000 people over four days as a global marker and laid down the gauntlet for hoarders of the life-saving vials to free up supplies.

The prime minister did not name the United States, but it was apparent the Biden administration which is sitting on tens of millions of doses of the Oxford-AstraZeneca vaccine was in the cross hairs of Holness’ rebuke.

In an impassioned appeal in the nation’s Parliament, Holness said that it would be a travesty of mankind for wealthy countries to allow COVID-19 vaccines to expire without making them available to countries starved of the inoculant.

Holness noted that the 75,000 doses of the AstraZeneca vaccine that arrived in Kingston days ago have already been used up as the health ministry ramped up inoculation in an islandwide blitz.

“Jamaica has shown that we have the capacity to mobilise mass vaccination campaign over a very short time frame. We are, therefore, calling on the countries that maintain large supplies of vaccine to release a portion of their stock to other countries,” the prime minister said during Tuesday’s sitting of the House of Representatives.

“I think [for] the countries that hold stocks to the point of expiration … it would be the greatest tragedy to humanity,” Holness charged.

Holness thanked the president of South Africa, Cyril Ramaphosa, for releasing the 75,000 doses to Jamaica.

More than 110,000 people have received their first dose of the COVID-19 vaccine, but the country is targeting 1.9 million to achieve herd immunity by March 2022.

Another 50,000 doses of AstraZeneca vaccine are expected to arrive on the island before month end.

Each person is expected to receive two doses of AstraZeneca to be considered fully vaccinated,

As he continued to press countries hoarding supplies, Holness said some nations with below-par take-up should release stockpiled vaccines to Jamaica.

“If we get the stock, we are not going to sit down on it. We are going to use it rapidly. And to countries like Jamaica who are not sitting down waiting on gifts, we have money allocated in the budget to buy back, so when you need it, we will order it and return it to you,” Holness asserted.

Holness made known his concerns that small countries like Jamaica could be left behind as the world seeks to move on from the COVID-19 pandemic.

“It can’t be that some people are fully vaccinated and ready to recover and others still suffering and struggling and can’t participate in the recovery. That is not fair in the world,” Holness stated.

In the meantime, the prime minister hailed the three consecutive weekend lockdowns, starting March 27, as a success as he announced new measures.

He said the spread of the coronavirus had been slowed but test positivity rate and hospitalisations remain high.

Holness said the half-day shutdown on Friday would not continue.

The measures will be in place until May 4.

The United Kingdom travel ban will continue until April 30, when it will expire.

Additionally, the travel ban on flights from South America, Brazil, Chile, Peru, Colombia, Argentina, and Paraguay has been extended until May.