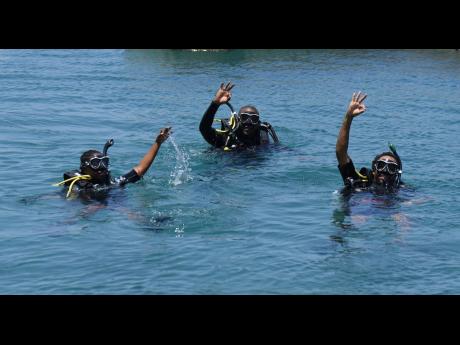 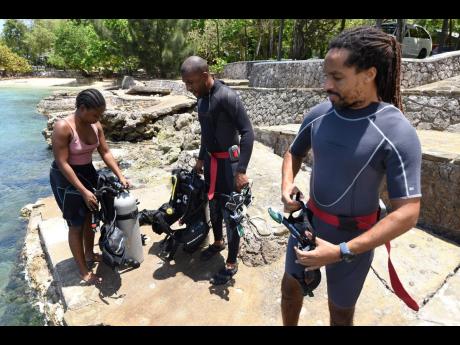 Ian Allen/Photographer
Inilek Wilmot (right), Travis Graham (centre), and J. James gear up for a dive in Oracabessa Bay, St Mary, There are big plans for a sea urchin nursery and an Irish moss farm. 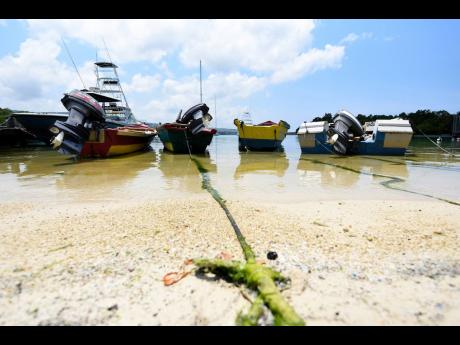 Riding on the back of a positive rating from the National Environment and Planning Agency (NEPA) for its 2020 performance, the Oracabessa Bay Fish Sanctuary has started construction of a sea urchin nursery and is mulling over the establishment of an Irish moss farm.

Despite the impact of the coronavirus in 2020, continued support from the Government and from Biopalma, through the European Union (EU), gave the sanctuary a lifeline.

“You can see where at other sites that are not protected, the fish stocks are extremely low compared to what we have managed to maintain in Oracabessa. That report has just been released and kind of indicates the level of success that we’ve managed to have even through the trying times,” Wilmot told The Gleaner.

Travis Graham, executive director of the Oracabessa Foundation and board member of the Oracabessa Marine Trust, said the move is aimed at ultimately allowing the fish sanctuary to be self-sustaining and to fashion the community as a microcosm of the blue economy.

Noting that the marine trust’s conservation model has been hailed as a success locally and internationally, Graham said the sea urchin nursery would be land based. Its focus will be on the diadema sea urchin.

Graham said that disease diminished the population of the diadema urchins in Jamaica and the Caribbean in the 1980s, thus undermining coral reef health.

“A lot of people would see sea urchins and are scared of them and see them as really a danger, but they are excellent reef cleaners and they are an important aspect of the ecosystem to maintain reef health.”

There are plans for the sea urchin nursery to ultimately transition into a marine sciences education tour.

Persons from the northeastern Jamaica community will be trained as tour guides to provide incomes.

Praising the United States Embassy for its support, Graham said the project, which was largely experimental, should become functional by year end.

Wilmot believes that the group can explore the growth of seaweed in the protected area to tap high demand for Irish moss.

“It’s a very healthy product and there are other edible seaweeds that there is market for outside of Jamaica,” Wilmot disclosed.

“We’re trying to be very innovative. These things might be spin-off, too, for the local community because the fishing industry needs diversification and needs innovation,” he added.