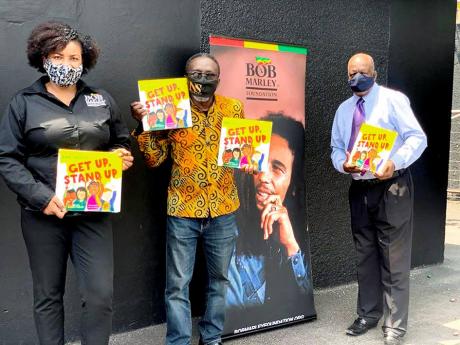 File
From left: Manager of the Bob Marley Foundation, Alicia Williams; Owen ‘Blakka’ Ellis, president of the Optimist Club of Trench Town; and Dr Henley Morgan, founder and chairman of Agency for Inner-City Renewal show off some of the books to be used to tackle bullying in the community.

The Optimist Club of Trench Town is banking on a donation of 40 copies of Cedella Marley’s children’s book Get Up, Stand Up to kick-start a campaign to root out bullying among children in the community.

The donation, which was brokered by well-known management consultant and founder and chairman of Agency for Inner-City Renewal, Dr Henley Morgan, will be the tool used to open discussion on the subject.

The books, which were recently handed over to club president Owen ‘Blakka’ Ellis and Morgan, will be given to children and schools in the communities and also used in a special campaign to encourage reading together and community conversation as healthy family practices.

Ellis noted that even with students engaging in lessons virtually, they are still vulnerable to bullying.

“Cyberbullying is a serious issue. Also, the cyberbullies can more easily escape detection. They can hide behind fake IDs (identities) online, unlike the playground bully who may risk being seen by a bystander. This book can make a dent because it encourages children to raise their voices, speak to someone, seek help,” he pointed out.

Ellis said the aim is to get well-known and loved personalities to read to kids via Zoom and YouTube and encourage teachers and parents to sit in on the sessions so that they become family and/or community experiences.

The idea is already a hit with manager of the Bob Marley Foundation, Alicia Williams, who has expressed an interest in partnering with the Optimist Club of Trench Town to make it happen, Ellis said.

According to a 2015 Anti-Bullying Consultant Report from PSEARCH Association Company Limited and the Child Development Agency (now Child Protection and Family Service Agency), some 64.9 per cent of students reported having “ever been bullied”. Further, 70 per cent said they were bullied within the preceding school year.

Other findings from the survey show that more females than males made these reports for “ever been bullied” – 66.9 per cent and 62.9 per cent, respectively – with the highest reports of bullying coming from the lowest grade levels.

Zoning in on the community of Trench Town, Ellis said: “At the community level, we often fail to recognise bullying for what it is. We have the tendency to trivialise the emotional discomfort we put children through with what are actually painful bullying practices by declaring that ‘is just a likkle joke’.

“As the old Jamaica proverb reminds us, however, what is joke to you can be death to me,” he said, adding that the sad reality is that in homes and communities, especially in the inner cities, there are children who sometimes experience untreated psychological harm from bullying , including teasing and ridiculing based on disabilities or peculiarities.

“There is also the problem of hurtful name-calling. A child could have one unpleasant experience or make a regrettable error and instead of responding with sympathy and understanding, community members use it to create a horrible nickname that not only follows the child into adulthood, but also becomes the source of conflicts that can end up in violent clashes,” he pointed out.

Sharing on the other initiatives the club is involved in the community with, Ellis said activities include efforts to strengthen educational processes for children, support strong family values, and promote a spirit of hope in the community.

Ellis said that despite the challenges brought on by the COVID-19 pandemic, it still takes a village to raise a child, and although the prospect is now harder, they are excited and enthusiastic about grasping opportunities for re-energising the village, and these books are a great tool in support of that work.