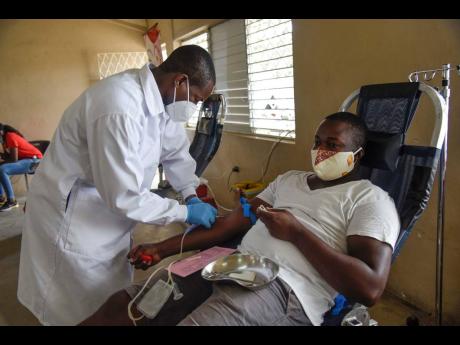 Nicholas Nunes/Photographer
Carlington Hall (left) from the Ministry of Health and Wellness assists Devon Guscott as he prepares to donate blood yesterday at a blood drive in Homestead, St Catherine.

After four hours, only three persons turned up to donate blood at the Homestead Community Centre in Spanish Town, St Catherine, yesterday. The blood drive was the second hosted this year by the ‘I Have a Heart’ (iHAH) Foundation on their journey to host a blood drive across the island in partnership with all members of parliament.

Abi-Gaye Smythe, founder and managing director of iHAH, said she was hoping to get at least 30 units of blood from Friday’s ‘Blood Drive: Save A Heart’.

“The pandemic has dampened everything a bit and persons are very sceptical about giving blood, some persons are scared and then the whole conspiracies now surrounding the vaccines have made things worse,” said Smythe who continues to serve while battling a rare and progressive heart disease.

Sixteen pints of blood were collected at the first drive held in February this year, in partnership with Pearnel Charles Jr and the Clarendon South Eastern constituency he represents. Since 2019, four blood drives have been held.

The Abi-Gaye Smythe ‘I Have a Heart’ Foundation is a non-profit organisation that aims to promote, educate, facilitate, and advocate for the needs of people with heart disease across Jamaica. In 2018, the foundation partnered with the New York-based Organization for International Development to provide free surgeries for 23 heart patients in Jamaica.

Andrew Wheatley, MP for St Catherine South Central, the constituency of which Homestead is a part, was the first person to give blood yesterday.

Keishawan Pinnock, assistant blood donor organiser at the National Blood Transfusion Service, said there has been a marginal increase in donations since March 2020 but it was still inadequate.

“When it comes to blood donations, we still had some of our partners that were keen on donating blood, but we were supplemented by our uniformed groups,” she said, explaining that while some partners have been keen on donating, fears surrounding COVID-19 have caused many to delay giving blood and cancel blood drives.

Pinnock reassured persons who wanted to give blood that the donation centres were adhering to all stipulations under the Disaster Risk Management Act.

She also spoke about the benefits of giving blood. “Each and every time you donate blood, you are reducing your cholesterol, you are burning calories,” she said.

Blood donation has also been listed as an effective method of stress management.

She is encouraging Jamaicans to start seeing blood drives as investments and start stocking up at the blood bank. Pinnock explained that during emergencies family members oftentimes have not been able to donate because of the rise in blood pressure caused by stress.