Wayne’s struggle to get back on his feet 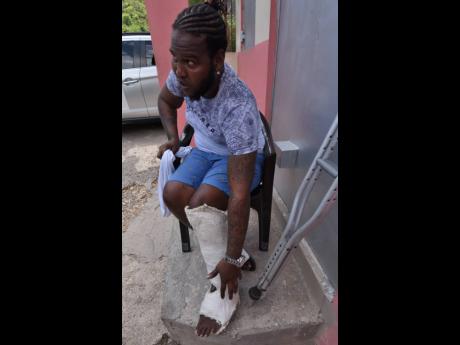 Ian Allen/Photographer
Wayne Wright shows where bullet struck him while walking home from work in August Town in 2018.

Wayne Wright swayed back and forth to try to soothe the sorrow that threatened to overwhelm him as he recounted readjusting to life on crutches in August Town after getting shot three years ago. The 26-year-old was shot in the ankle on the night...

Wayne Wright swayed back and forth to try to soothe the sorrow that threatened to overwhelm him as he recounted readjusting to life on crutches in August Town after getting shot three years ago.

The 26-year-old was shot in the ankle on the night of October 17, 2018, while coming home from work. He had just exited a taxi when his life changed forever.

“Mi just feel a sting, so mi never know. So mi run off, and as mi run off, mi just drop ‘cause the foot just bruk right off,” he said, recalling how he became a victim of gang warfare between Jungle 12 and Bedward Gardens, violence-plagued sections of August Town.

Wright said he had never cried for his mother as much as he did in that moment and during the two months he spent at the University Hospital of the West Indies.

His mother, Pauline Campbell, had succumbed to cancer six years before the incident at the age of 49.

Pacing himself between trembling breaths, Wright said that his emotional battle has intensified since getting wounded and being unable to move about freely.

As the youngest of three children, Wright’s family did not tell him that his dominant parent was battling cancer. It was something he came to realise at age 16 when she started treatment. He watched her health deteriorate for a year and a half before she passed.

“Is like mi just give up ‘cause mi usually tell miself say anytime when she gone, mi a go, too,” he said, explaining that he never had a good relationship with his dad, who also died of illness in 2020.

The hurt and anger have really spiralled out of control now that he wishes she was present to care for him. He guiltily expressed that he should have known more from the symptoms his mother exhibited.

So far, Wright has undergone three surgical procedures, including the placement of steel rods and wearing a cast. He has been waiting more than a year for another round of surgery but still has expectations of getting behind a steering wheel.

As he struggles daily with the legacy of violence, he doesn’t allow machismo to stop him from admitting that he is in need of help to process his emotions.

“Mi just want somebody fi talk to,” he said.

Wright also grapples with image concerns because of his weight gain since the shooting.

“Mi did weigh bout 300lb before, you know, and me did lose the weight before mi madda dead, and now it is coming back on,” he said, noting that he once bore a chiselled physique.