Truck crushes car but occupants walk away from scene 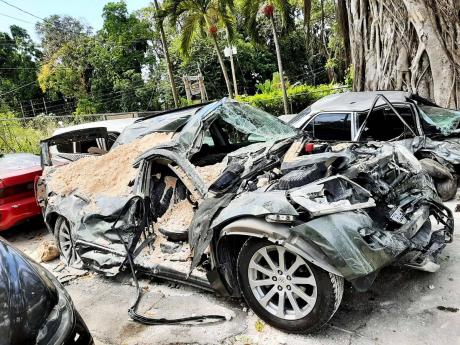 PHOTO BY CARL GILCHRIST
The wrecked Suzuki Grand Vitara, from which two men walked away alive on Thursday, was towed to the Prospect Police Station in St Mary.

A truck laden with marl overturned, crushing a Suzuki Grand Vitara with two men on board in a bizarre accident along the Rio Nuevo main road in St Mary on Thursday afternoon.

But the driver of the Vitara and the passenger, his brother, both escaped with minor injuries.

A Toyota Corolla was also involved in the accident, but the car sustained minor damage.

The accident reportedly happened some time after one o’clock and caused a huge pile-up of traffic in both directions.

The driver of the car, who gave his name only as Mark, said that while he was headed towards Boscobel, the truck operator, who was travelling in the opposite direction, swerved from two other vehicles and lost control, causing the truck to overturn. The truck then slammed into the Corolla.

“It was difficult to get out, but my brothers were there with me, and they were able to pull me out of the vehicle,” said Mark, who said that despite the bandages on his arm and other sections of his body, the injuries were “nothing serious”.

“My father passed, and I buried him yesterday (Wednesday), and I just feel that his spirit was there with me and my brother, ... and I felt that that was what really pulled us through this almost fatality,” he told The Gleaner.

But he also credited wearing his seat belt for saving his life.

“I’m sure that if I never had that seat belt on, I don’t think I’d be here right now,” he said.