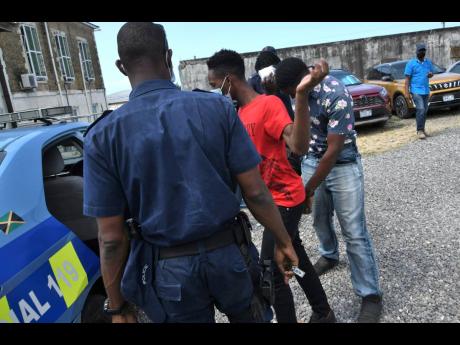 Rudolph Brown
Police officers escort three of five persons accused in a buggery case now before the St Ann Parish Court. When they appeared in court yesterday a new date was set for hearing on May 14.

The five persons charged in connection with a case of buggery committed against a 13-year-old girl in St Ann on April 26 were remanded when they appeared in the St Ann Parish Court yesterday.

The accused, two 16-year-old boys and three men aged 18, 20 and 23, are charged with abduction, buggery and grievous sexual assault. They are scheduled to return to court next week Friday, May 14 when the matter will again be brought up.

Three lawyers are representing the five accused, with one lawyer speaking for three. The two lawyers representing single clients told The Gleaner at the end of proceedings yesterday that bail applications were made for their clients and these are expected to be heard on Friday.

The young girl was said to be staying with her grandmother, while her mother went to work. It was reported that while she was on her way to a shop, she took a shortcut where she was accosted and dragged into an unfinished building and buggered.

The incident was reported to the police several days later, after which the cops moved in and apprehended the suspects.

Meanwhile, in another case of buggery in St Ann, involving a five-year-old boy, the 20-year-old accused appeared in court on Thursday and was remanded to reappear on Monday, May 10.

Reports surrounding the case are that the boy’s mother was bathing him on Sunday when he complained of feeling pain in his anus. Upon checking, the mother saw what appeared to be bruises in the area and made a report to the police.

After investigations the accused, said to be a neighbour of the boy, was arrested and charged.

Both incidents were condemned by residents of the parish, who expressed outrage at the offences committed against the children.