‘10 years of heartache and pain’ 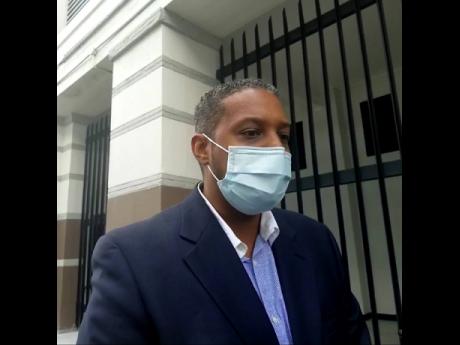 Photo by Tenesha Mundle
Roderick Francis Jr speaks to the media after Thursday’s sentencing of two men to three decades for the murder of his father. 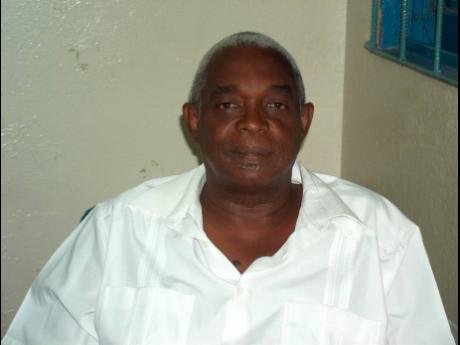 Justice Georgiana Fraser believes that there are no prospects for rehabilitation for convicted murderers Carlos Batista and George Gardener, who have maintained their innocence in the daylight murder of well-known businessman Roderick ‘Bunny’ Francis.

“As far as the court is concerned, there is no remorse expressed, and, therefore, I don’t see any rehabilitation in the making,” Justice Fraser said.

The presiding judge made the observation before sentencing a teary-eyed 52-year-old Batista, a Dominican Republic national, and apparently unfazed 37-year-old computer technician Gardner to 32 years and eight months to life in prison.

The offenders, who were convicted of murder on January 18, were both originally sentenced to serve 37 years in prison before being eligible for parole but got four years and four months shaved off the term for time spent in custody.

Both men were arrested and charged in 2010 following the murder of the managing director of B&D Trawling Limited, who was ambushed and shot outside his home in Queensway, St Andrew, on June 25.

Following his murder, the two offenders were among four men who were arrested and charged for plotting the murder.

During the eight-week trial, the court heard that Batista had rented a motor vehicle that was used to stake out Francis’ residence prior to his death.

The businessman’s son, Roderick Jr, who was leaving home on the day his father was attacked, challenged the assailants in a gun battle and shot at the getaway vehicle.

The court further heard that Batista consequently contacted Sheldon Watson, who facilitated and assisted with the repairs to the vehicle.

Watson, however, had pleaded guilty to accessory after the fact and was sentenced to two years in prison, suspended for three years.

The third man, Newton Welsh, was freed after the Crown offered no evidence against him at the start of the trial last December.

However, before Batista and Gardner were sentenced, the judge told the court that she would have to consider the aggravating factors. She listed those as premeditation, that the offenders were mature and well-thinking adults who were industrious members of society, that a gun was used, that the men made an attempt to conceal the murder, and that the killing was carefully planned.

She also considered as mitigating factors that the men had no previous convictions, and that they were breadwinners for their families, and that they stood to suffer loss of employment and family fellowship.

The judge also took into account that Batista is diabetic and has a disability in his left hand.

Justice Fraser, however, noted that the killing was gruesome.

Attorney-at-law Pierre Rogers, who represented Gardener along with Shane Williams, during his plea-in-mitigation, asked the judge to consider that his client had a reputation of being neither a threat to himself nor society and should be given a second chance.

Deborah Martin, who, along with Patrick Peterkin represented Batista, asked the court to note that her client was a diabetic and that he had lost significant weight while in custody.

She also notified the court that Batista suffered a disability to his left arm after being shot five times in 2018. Therapy, she said, had been stopped because of his incarceration.

Martin also told the court that Batista’s family had to drastically downsize their lifestyle since he was arrested.

In the meantime, Roderick Francis Jr expressed satisfaction that justice has been served.

“It’s been 10 years of heartache and pain since that date. People will not understand what we as a family have gone through,” he told The Gleaner.

“... I feel safer, and Jamaica is safer now that they are behind bars. Now we can have closure and have time to heal.”