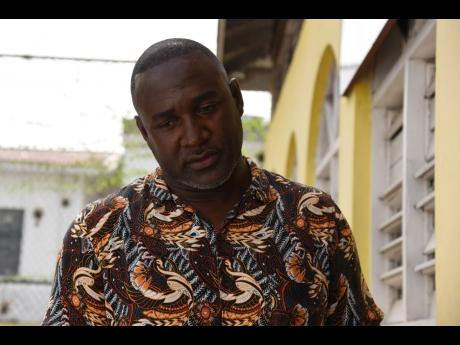 File
Dayton Campbell, the under-fire general secretary of the PNP.

The scandal surrounding People’s National Party (PNP) General Secretary Dr Dayton Campbell has intensified with the submission of statements from three females who are alleging that they had sexual relations with the politician when they were minors.

The statements are part of the defence filed by PNP activist Karen Cross at the Supreme Court on May 13 in response to a defamation lawsuit against her and two bloggers, Natalee Stack and Michelle Stern, filed by Campbell in March.

Campbell, in his lawsuit, has accused Cross and the other defendants of writing malicious, false, and defamatory comments on social media alleging that he had sex with girls who were under 16 years old.

However, Cross, who is relying on claims of truth and fair statement as her defence filed by her attorney, included the statements that were reportedly given by the three alleged victims and signed by justices of the peace (JPs).

In the first statement, which is dated March 1, a female who is now 18 alleges that she started having sexual relations with Campbell three months before her 15th birthday.

She claimed they had sex three times and that she last had sexual relations with the medical doctor during the 2016 general election on a Friday.

The accuser further alleges that she and other girls would drive around with the popular politician when he visited Brown’s Town in St Ann and that he would take them places. Brown’s Town is part of the St Ann North Western constituency which Campbell represented in Parliament.

The alleged victim reportedly told Cross about the situation in 2019.

The second statement, which was written on March 12, claims that the alleged victim started having sex with Campbell in 2014 when she was 15 and he was the MP for St Ann North West.

The accuser claimed that their sexual encounters continued up until 2016 and that he would take her to hotels.

She further purported that they had sex in Kingston, Manchester, and Clarendon while the politician was campaigning.

According to the statement, the now-woman, who said that Campbell had done things for her family, confided in Cross when the activist visited St Ann claiming she was scared. She also told Cross that the doctor liked her sister.

She also alleged that Campbell has helped her mother and that she is fearful of her.

According to the third statement, dated March 18, the female met Campbell when she was 15 after her mother told her to ask him for assistance with school fees and a job for her brother.

The female alleged that when she approached Campbell, he told her that her breasts were overly developed and asked her if she was certain about her age.

The female also claimed that she started going places with Campbell after he helped her family and paid her school fees.

She said they travelled several places and he took her virginity.

According to the victim, they had sex several times because she liked Campbell.

She also reported that she had accompanied Campbell to Kingston, Manchester, and St Elizabeth for conferences.

The female, in the statement, said she also confided in Cross and that she, too, was scared.

Based on the statements, all the purported victims gave reports of their own free will.

The statements from the alleged victims were signed by two JPs and stamped. One of the JPs indicated that she had seen the identification of two of the accusers.

In April, the police, who had launched an investigation into the sexual abuse reports against the two-term MP, ended their probe after stating that no basis was found for the allegations.

At that time, the police had indicated that no witness had come forward.

Campbell and his attorney-at-law Georgia Gibson- Henlin, QC, in the aftermath, had denied the allegations and dismissed reports of Campbell being involved in any criminal offence or immoral conduct.

The PNP general secretary had also filed a lawsuit after Cross refused to retract her statement and apologise.

Efforts to reach Gibson-Henlin for comment on the latest development were unsuccessful.