Bouncing back from the dead

Jamaican dumped as a toddler graduates with doctorate in nursing 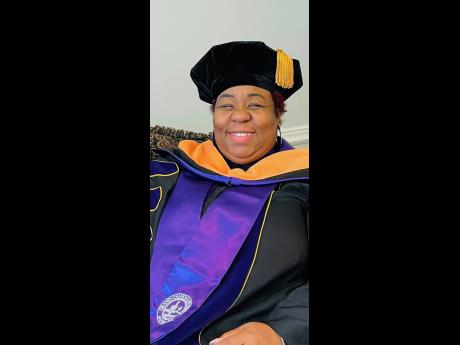 Contributed
Joan Edwards has come a far way since being abandoned as a toddler.

At 49 years old, Joan Edwards, a Jamaican in Livingston, New Jersey, is a happy, accomplished woman. She is the mother of two grown children and has just graduated with a doctoral degree in nursing practice from Grand Canyon University in Phoenix...

At 49 years old, Joan Edwards, a Jamaican in Livingston, New Jersey, is a happy, accomplished woman.

She is the mother of two grown children and has just graduated with a doctoral degree in nursing practice from Grand Canyon University in Phoenix, Arizona.

She currently supervises a staff of 140 healthcare workers at a medical facility and is dating a Jamaican man who is crazy about her.

But the picture-perfect life that Edwards now leads in the United States, cruising along the New Jersey Shore on weekends in her late model Mercedes-Benz, is a far cry from her childhood years growing up in St Ann, Jamaica.

Edwards revealed that, when she was toddler, she was placed in a small grave and left to die because her family was poor and did not have the resources to take care of yet another child.

“My grandfather, who had my other two siblings, made it clear that he was unable to accommodate me because his hands were already overloaded,” said Edwards, the third of three children to a teen mother.

“I was given to my father who was married to someone else at the time. I was a cry baby and my father’s wife told him I had to leave.

When her grandmother could not find her one morning, she paced around the house and through bushes until she heard a distant cry from the then-eight-month-old Edwards.

The chance discovery saved her life, but it was not to be the end of her woes, as her grandfather remained defiant.

Edwards was given to an elderly neighbour to stay at nights, while her grandmother cared for her at daytime.

But Edwards said that her grandfather eventually softened his stance and allowed her to reside at the house.

Having attended Epworth All-Age School in St Ann, Edwards relocated to the Corporate Area, lodging with a friend of her mother’s who attended Kingston Secondary School. She scored six Caribbean Examinations Council passes before studying nursing and migrating to work in the United States in 2005.

Armed with the tough lessons and steely resolve honed in her homeland, Edwards landed a nursing job in New Jersey with her associate degree from Jamaica, before reading for bachelor’s and master’s degrees at Walden University.

Despite losing a son in a motor vehicle crash four months into her doctoral studies, Edwards persevered through the pain of that tragedy and the COVID-19 pandemic.

So how will attaining a doctoral degree change the scope of Edwards’ vision and mission?

She said she wants to continue being a “transformative voice for the voiceless”.

“Having the doctoral degree in nursing puts me in a solid position to chase my dream, which is to advocate for the vulnerable population, which includes the mentally ill, the elderly, the uninsured, minorities and low-income clients,” Edwards told The Gleaner.

“As a child, my grandmother always hammered in me her wish to see me sitting behind a desk, and here am I today as director of nursing in a subacute facility empowering and impacting the lives of both patients and staff members.”