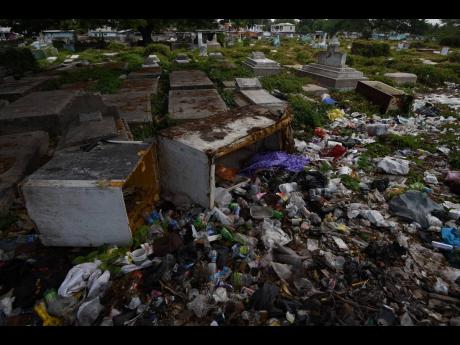 Ian Allen/Photographer
Discarded appliances are among the debris that now chokes the No. 5 Cemetery in Spanish Town. 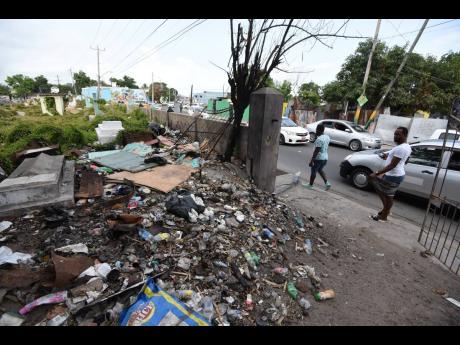 Ian Allen/Photographer
Commuters pass a mound of garbage at a ramshackle entrance of the No. 5 Cemetery in Spanish Town, St Catherine. 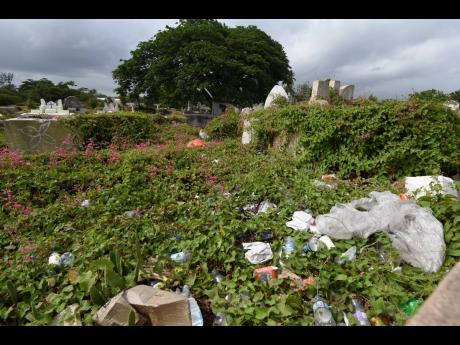 Ian Allen/Photographer
Some visitors to the No. 5 Cemetery have been unable to find the graves of their loved ones because tombs have been overtaken with vegetation.
1
2
3

A dump. That’s the long and short of the No. 5 Cemetery in Spanish Town, metres away from the blighted high-rises of Tawes Pen in the distance.

Situated at the vertex of Manchester Street, Chambers Lane, and Wellington Street, the burial ground has been overtaken by bushes.

The once-solemn resting place has been transformed into a modern-day junkyard - a jumble of bottles, board, and boxes.

“This has become a regular dumping ground where people carry dem waste. People come just dash weh everything on the graves dem,” said a bystander.

The facility was ordered closed three years ago by the St Catherine Municipal Corporation because it ran out of burial space and has become an eyesore and hunting ground for vagrants.

Goats and dogs roam the property, which is littered with old refrigerators, television sets, toilets, and other garbage.

Many tombs and vaults have fallen into disrepair, some even caving in.

Orville Ffolkes has travelled from the United States of America to visit his parents’ graves, but has had to leave the cemetery heartbroken.

“I cannot find it, as the rubbish and trees have overgrown in the place, so I will have to leave without a proper visit. I think that the authorities should deal with the problem,” Ffolkes told The Gleaner.

That view was endorsed by Frederick Jackson, former vault maker at the No. 5 Cemetery, who has been adversely affected by the closure.

“I worked at the cemetery where I built vaults for Bryan’s Funeral Home. Yes, I do it for years until it closed and I start to work at Church Pen, but that shet dung, too,” Jackson said.

The former employee disclosed that his father-in law is buried at No. 5.

“They (the authorities) need to clean it, as the bush holds the water that soak and damage the graves, which sometimes cave in, exposing the inside,” a resident, who requested anonymity, said.

No. 5 is a microcosm of an emerging national crisis with Jamaica’s public cemeteries running out of space fast.

A 2019 Sunday Gleaner expose revealed that the country had, at that time, 713 acres of dedicated burial space available, representing 26 per cent of the 2,700 acres that should have existed, according to National Environment and Planning Agency benchmarks.

The Ministry of Local Government has overall responsibilities for public cemeteries, although operational oversight falls within the purview of municipal authorities.

Telka Holt, commercial services manager of the St Catherine Municipal Corporation, said that plans are in train for the No. 5 Cemetery to be cleaned.

“We are aware that it is in a deplorable condition, with garbage dumped all over. It is a delicate situation where we have to send the right personnel in to clean it,” Holt told The Gleaner.

“We are definitely going to address the problem,” she added.

Holt said that the Ministry of Local Government ordered the formal closure of the cemetery in 2018 because it ran out of space.

St Catherine (26.7 per cent) had one of the highest ratios of capacity to bury the dead.

The commercial services manager said that the cemetery is scheduled to be cleaned every December but pledged to fast-track intervention because of the scale of the crisis.

The St Catherine Municipal Corporation is responsible for the upkeep of eight public cemeteries in the parish.