‘I will recover even stronger’ 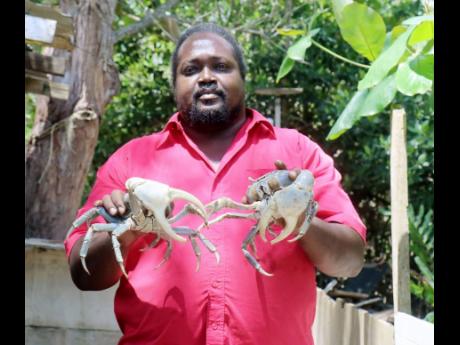 Jermaine ‘Crabby’ Morris has vowed to claw his way back to establishing an even more successful enterprise after thieves raided his crab pen on Tuesday night, making off with the vast majority of his male crabs.

Despite being saddened, the resident of Rock, a district on the outskirts of Falmouth in Trelawny, is determined not to allow the incident to derail his dream of creating a successful business out of what has been his life-long passion for crabs.

“I have a heart of a lion and a mind of an entrepreneur,” said Morris in explaining his mindset just hours after discovering that his crab pen had been breached and thieves had put a dent in his thriving business.

“[Tuesday] night, I was outside working late on the rabbit hutch, and at about 9 p.m., I fell asleep on the sofa. I woke up at 2 a.m. because I heard my dog barking really bad, so I went outside to look, and I realised that someone broke into one of my crab pens,” said Morris

“I made a check around the area, but I didn’t see anybody or anything ... . All I know is they took 95 per cent of the male crabs from one of the pens,” added Morris.

Morris valued the loss at between $150,000 and $200,000, which is fairly substantial, especially at a time when he is seeking to re-establish himself after taking a hit from the COVID-19 pandemic.

The thieves struck less than a day after The Gleaner shared how Morris has fashioned a business from his childhood passion and his dreams of entering the export market.

NOT THE FIRST TIME

Tuesday night was not the first time that robbers have visited misery on the ambitious Morris as thieves previously raided his operation and made off with some prized crabs.

“About a year ago, I was robbed, but it wasn’t a significant amount of crabs that were taken – maybe about three dozen – but those were prized crabs, and they were extremely huge. You hardly see crabs that big,” said Morris. “This is the biggest hit I ever got. I know it is a product that is in great demand. It could be a case where someone was in the bush hunting and saw my crab pen and decided to steal all of them.”

While Morris has not reported the theft to the police, Sergeant Bruce Williams, who heads the Trelawny police’s Praedial Larceny Unit, told The Gleaner that the theft would not fall under his remit.

“This doesn’t fall under praedial larceny. Praedial larceny refers to crops and livestock – things like cows and goats and yams and bananas,” said Williams. “The stealing of the crabs would be a case of simple larceny.”

Morris says because he is willing to put in the work that is required to build his business, he will brush off this latest setback and keep on striving.

“Not everyone is willing to put in the hard work and hunt. It bothers me, but it won’t break my spirit. I am unstoppable. In the end, this is just a brush. I will recover even stronger,” said Morris, who was out crab-hunting when The Gleaner contacted him. “Father God gives His strongest soldiers the hardest fight. I am a warrior.”