Mickele on the mend but family worried about mental state 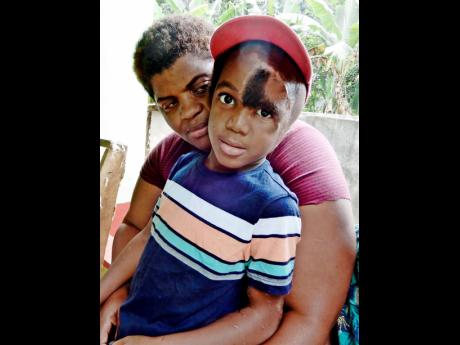 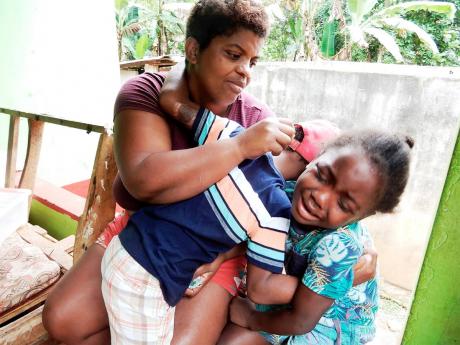 PHOTO BY CARL GILCHRIST
Mickele Allen, with help from mom, Shereen Grindley, tries to comfort his crying twin Mickelia, who feared he was going to be taken away again.
1
2

The image of a bloodied five-year-old with his pants torn off, shirt soaked in blood, and flesh torn from his arm and head shook Jamaicans on November 16 last year, when The Gleaner broke the story of Mickele Allen being mauled by dogs in St D’Acre...

The image of a bloodied five-year-old with his pants torn off, shirt soaked in blood, and flesh torn from his arm and head shook Jamaicans on November 16 last year, when The Gleaner broke the story of Mickele Allen being mauled by dogs in St D’Acre, St Ann, the previous day.

Mickele, now six, has come a long way since that fateful day.

A hastily arranged trip to the Montefiore Hospital in Bronx, New York, to begin a series of emergency surgeries, which will continue later this year, has seen Mickele recover from a state which scared his mother, Shereen Grindley.

Despite the scars, Mickele, chatting and romping as he did with twin sister Mickelia and other kids in the yard, appeared quite normal as The Gleaner visited the household to speak to the family. Still, he elicited a range of emotions from relatives.

Every now and again, Mickelia would start crying, prompting queries, and it was left to mom Shereen to remark, “She’s crying because she feels he’s going to take away Mickele.”

She had to comfort the child each time she cried, reassuring her that Mickele would not be taken away – again.

It has been a rough journey, Grindley admitted, and even without saying so directly, her constant reference to God suggests the incident has strengthened her, spiritually.

“At first, I was saying it was not going to work but through it all God has been in the midst of it and it is more than what I even think. It worked more than how I even think it would have worked so all I can say, to God be the glory. Words cannot explain, but all I can say, thanks a million to all. Even if it’s a little bit, much less if you’ve done a lot, words can’t explain how grateful I am for it,” she added.

In the early part of her stay in New York, overwhelmed and fearing the worst, Grindley hardly ate anything for close to two weeks.

Some relief came after the first major surgery on Mickele’s head. The hospital had sent a team for him at 6:30 a.m. and it wasn’t until after 9 p.m. that she saw him again.

“When I went back after 9 and I saw him, and I hear Mickele say, ‘Mi want mi mada,’ it just come een like relief jus … yuh understand?” she said with emotion heavy on her voice. “And I said to myself, from Mickele live out this one, there is no need to worry. And see Mickele here, walking up and down. All I can say, to God be the glory. He is still in the healing process, man.”

After one minor and five major surgeries, Mickele has to return to have his left ear reconstructed as it was completely torn off by the bloodthirsty animals. He is also due to have additional surgery to plant hair on the left side of his head, which is now completely bald, revealing the scars that not just sit atop his skull but, no doubt, are embedded deeply in his psyche.

A patch of hair grows in the middle of his face where surgery was done and neither it nor hair on the right side of his head should be cut, Grindley pointed out.

“When I ask, ‘Can I cut the hair?’, the surgeon is saying, ‘No, because the hair [is] needed for the other side [of his head],” said Grindley.

“He’s going back, hopefully, the ending of this year to the first part of next year, the surgeon is going to take a rib from the side to make the ear because he’s with one ear now. And he is so concerned because the other day he said to me, ‘Mommy, can I get one of your ears?’ So, I realise it is being a bother to him now,” Grindley told The Gleaner.

The mother revealed that her son’s behaviour has changed significantly since the mauling and subsequent surgeries.

Unfortunately, Mickele has fallen off academically, which, although not a surprise, has left his mother quite concerned.

“He has a tablet, but sometimes he doesn’t want anything like that. Sometimes when I call him, he cries and says he doesn’t want to do any work. So, I mention it to the teacher, the teacher is saying he’s still traumatised. But I’m still concerned because he’s not where he was. Mickele could have spelled his name, now (I say) ‘Mickele spell yuh name. M … and that’s it’.”

Grindley said she doesn’t know where to turn for help to address this situation.

Pauline Brown has been a tower of strength to her daughter and her grandson, from day one. She was there with him on the trips to the Alexandria Community Hospital, first, then the St Ann’s Bay Regional Hospital and then to Kingston.

“I just couldn’t leave him an inch, unless he’s sleeping,” Brown explained. “And him was just crying, crying fi him grandmother. If mi come an’ hold him by him hand, ... him say, ‘No, grandma. Hold me tight.’ And him look on me and say, ‘Grandma, sit down on that chair. Grandma, sit down for mi nuh want you to drop down. Sit down an’ hold mi hand tight’.

But now, her concern, expressed with heartfelt emotion, has to do with the mental state of her six-year-old grandson.

“I’m telling you, Mickele’s condition from November until now, I’ve seen, sometimes, a lot of change in him because sometimes he acts as if he’s not at the place where he’s supposed to be,” Brown expressed.

“Anything you tell him, him wi understand like what you tell him to do. If you tell him to move a shoe from there, he will move it, but then him move it an’ him carry it come put it back same place,” she explained.

While The Gleaner was there, Mickele showed no sign to validate his grandmother’s concern.

“I’m good,” he later told The Gle aner, when asked how he was doing.

In a hurry to rejoin the company of the other kids in the yard, he ended the brief chat there and then.

And while all the attention has been on the injured child, the additional burden the family has had to bear because of the dog attack went largely unnoticed.

“To tell the truth, it’s very hard. He is mine, so sacrifice has to be made,” said Grindley, who is unemployed at this time.

Grindley had started a nursing course, completing 11 of the 12 clusters – passing 10 and failing one. She hasn’t been able to go back to finish up. She is also certified in housekeeping and laundry.

“I have my certificate. Everywhere I apply, no job, no job,” she said. “I was planning on finishing my nursing course, but I don’t want to start and they call Mickele and I have to leave again.”

She said she would be grateful for any form of assistance.