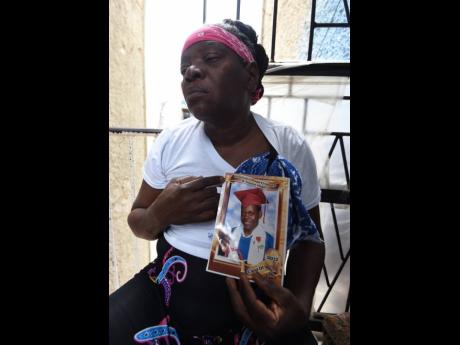 Ian Allen/Photographer
Barbara Richards mourns as she holds a picture of her son, Shedaine Richards, who was fatally shot by gunmen along Rum Lane in the Kingston Central Police Division while on his way home from work on Wednesday night.

The security forces have ceded ground in Southside, one of several communities in the Kingston Central Police Division, where rival gangs have unleashed a reign of terror this year.

That is the view of a relative of 23-year-old Shedaine Richards, otherwise called ‘Shadow’, who was fatally shot along Rum Lane about 10 o’clock on Wednesday night.

The relative, who requested anonymity because of security fears, recalls the days when the inner-city community enjoyed relative peace and calm when the police maintained a security post at the intersection of Barry and Fleet streets.

Declaring that the police were of no help to the community, the resident said the violence is now so out control that not even a zone of special operations (ZOSO) – a recommendation of People’s National Party caretaker Imani Duncan-Price – could quell the warfare.

“ZOSO just make the man dem run from the area and go somewhere else and go kill people,” the lifelong resident of Southside told The Gleaner on Thursday.

“The best of Southside a when dem (security forces) did pitch a tent at the corner a Barry Street and Fleet Street. That was the best time when every 30 minutes dem woulda circle (patrol) ... . At least the man (criminals) dem never feel like a dem a run the place.”

Worked at the hospital

Richards was reportedly walking along Rum Lane when he was shot and taken to the Kingston Public Hospital (KPH), where died while undergoing surgery.

Ironically, Richards, who would have turned 24 on July 3 – a birthday he shares with his mother – worked as porter at the KPH, where he was on the night shift.

At the family home on Wednesday, the deceased’s mother, Barbara Richards, was seated on a chair outside her doorway clutching his 2012 graduation picture after he left Windward Primary and Junior High School.

She rocked from side to side, with groans her only language. Shortly afterwards, she got a phone call and burst into tears.

Killings and shootings have climbed by more than 30 per cent in Kingston Central year-on-year, with around three dozen victims of murder.