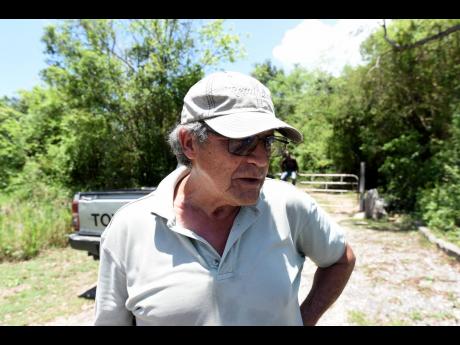 Ian Allen/Photographer
Martin Hopwood says that he is happy that the Government has abandoned plans to grant a mining licence for the Puerto Bueno Mountains in Discovery Bay, St Ann, as he thinks the dust would have been a bother to neighbouring communities. 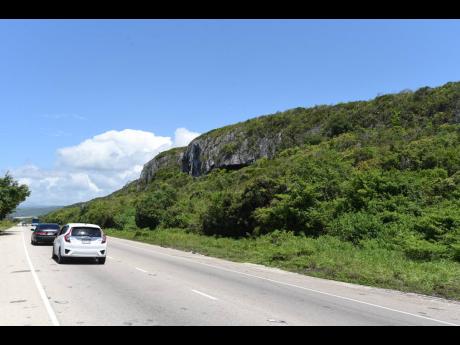 Ian Allen/Photographer
Motorists drive by a section of the limestone-rich Puerto Bueno Mountains, which have been a source of much contention over the past year.
1
2

The announcement by Prime Minister (PM) Andrew Holness that the Government has abandoned plans to allow mining in the Puerto Bueno Mountain, also called Dry Harbour Mountain, in St Ann has been met with both rejoicing and quiet disappointment.

Environmentalist Wendy Lee, who started a petition to prevent mining in the Puerto Bueno Mountain and later headed a group that brought a court action against the Government over the plans, is not entirely pleased with Holness’ announcement, labelling it a “bizarre twist in a confusing story”.

Lee is one of eight claimants who filed a case in the Supreme Court in December against the attorney general, the Natural Resources and Conservation Authority (NRCA), and Bengal Development Limited, owners of the property. The claimants are seeking a ruling that there is a breach of their constitutional rights and a permanent injunction against mining on the 569-acre property.

Responding to queries by The Gleaner, Lee said she is still looking forward to a declaration from the Constitutional Court on the matter.

“The announcement that the Government is ‘abandoning the plan’ to allow quarrying in the Dry Harbour Mountains because the prime minister has ‘heard the concerns’ of the citizens is the latest bizarre twist in a confusing story,” Lee remarked.

“In the first place, given the long-recognised ecological importance of the Dry Harbour Mountain and the fact that it is zoned for protection under the St Ann Development Order, it’s hard to understand why an application for an environmental permit for a quarry in this area was even accepted by NEPA,” she continued.

NEPA is the National Environment and Planning Agency, the State’s chief guardian against environmental abuse.

Lee said that for the past 20 years, local persons, including herself, have been fighting to preserve “this dry limestone forest and stunning landscape”.

The latest fight saw them seeking a declaration from the Constitutional Court.

“The Government and the developers both applied to strike out our claim, but their applications were refused on April 23, 2021, thus clearing the lawsuit to go forward to the full court. What a coincidence it is that just a few weeks after this event, the prime minister is finally hearing the concerns of the people!” Lee exclaimed.

“Personally, I look forward to a declaration from the Constitutional Court on this matter, as the preservation of the Dry Harbour Mountain goes beyond just the abandonment of quarrying, and is far too important to rest on a ‘directive’ from the responsible minister,” she insisted.

A resident of the area, Martin Hopwood, welcomed the latest development, claiming any mining in the area would have meant double trouble for him.

“I’m already affected by the dust from Noranda (bauxite-mining operation) and this would have been a double dose. I would get the white dust and the red dust,” Hopwood told The Gleaner.

Hopwood explained that mining the area would mean using dynamite, which, based on the rock formation of the area, would result in damage to houses, swimming pools and other structures at villas and resorts in the area.

But there are others who were hoping that the project would have gone ahead as it would have meant jobs and more earnings for business operators nearby.

“I was hoping it would happen because it would help out my business,” one such business operator told The Gleaner.

“Because of the COVID nothing is going on, so I’m not too happy about it. Most of the young guys said they were going to get work because of the COVID they’re out of a job, so most of them not comfortable, they were looking forward to the mining. It’s sad, though; but a so it guh,” the business person said.