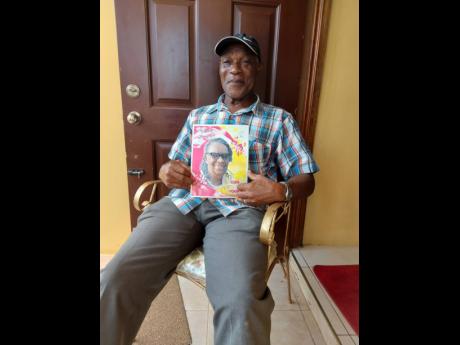 His smile could easily be mistaken for joy, but the bouts of laughter and happy disposition are a veneer that masks the agony of Pastor Eversley Brooks, whose wife of 47 years died from COVID-19 in October 2020.

Brooks is one of hundreds of citizens who have lost friends or family to the new coronavirus, the pandemic whose scourge continues to inflict social and economic pain as Jamaica prepares to cross the emotional threshold of 1,000 deaths.

The 73-year-old has described his then wife Jean’s ordeal as frightening, leaving him with more questions than answers, while clinging to his faith.

The widower said that what began as minor cold and flu symptoms developed quickly into respiratory complications that forced his wife to be hospitalised and isolated from family and friends for 14 days. He still doesn’t know how Jean, then a deaconess of the Bonito Crescent Apostolic Church he pastors, contracted the virus.

“She went out to gather some clothes from the line and she got wet - that was the Friday, and by the Saturday she was coughing. I took her to the doctor, and the doctor said she didn’t have COVID,” the cleric told The Gleaner.

But Brooks’ wife’s condition began deteriorating and he took her to a private medical facility before she was referred to the Mandeville Regional Hospital. She had initially tested negative.

By Sunday, her health had not improved and she tested positive for COVID-19 and was diagnosed with pneumonia.

His family then quarantined at their Mandeville home. They tested negative.

Brooks, who believes that his wife may have become infected in the hospital, said that he emerged from the 14-day quarantine to visit her, but was hit with gut-wrenching news.

“I was told she made a change, she needed oxygen and was on the [ventilator] ... . The next day I got a call from the hospital that Mrs Brooks took a turn for the worse ... and that’s how I lost my wife,” he told The Gleaner.

That sense of loss and disconsolateness has been the common thread that has universalised the toll of global suffering from the swanky skyscrapers of Los Angeles to the favelas of Brazil, and from Kingston’s salubrious suburbs to remote rural districts like Corn Piece, where Jamaica’s first COVID-19 casualty had resided.

Nearly 50,000 infections have been recorded here since the first case in mid-March 2020, but a series of lockdowns and gathering restrictions, dating back two and a half months ago, has caused a dramatic slowing of the spread.

Positivity rates of upwards of 35 per cent and hospitalisations topping 400 had threatened the collapse of Jamaica’s public health system, with an oxygen crisis and dozens of deaths ringing alarm bells in March and April this year.

Senior medical officer at the Percy Junor Hospital, Dr Carlos Wilson, said that his facility has not gone unscathed from the pressure that brought the health sector to the brink of buckling. The hospital chief has praised his staff for holding up during the pandemic, which he has described as one of the most difficult periods.

Percy Junor has accounted for some of Manchester’s 73 coronavirus deaths. All told, Jamaica has recorded 997.

“You saw relatively health folks – some with co-morbidities, some with no co-morbidities –contracting the virus and dying, so you know that this is not a joke thing,” said Wilson.

Persons as young as four years old have died from the highly contagious respiratory disease, but those 60 and over – the most vulnerable cohort – have borne the brunt of the tragedy, accounting for 752, or more than 75 per cent of, COVID-19 mortalities.

Jean Brooks, who died at 73, was one of the 245 casualties among those aged 70-79, which accounts for the largest aggregate death toll for all 10-year age cohorts.

With no silver-bullet drug for patients, Wilson revealed that treatment for COVID-19 patients has been predominately supportive care, which entails the administering of oxygen, intravenous fluid, and, in extreme cases, intubation and ventilation.

“To date, there is very little evidence to suggest a specific type of medication that is best for COVID-19,” the senior medical officer said.

Treatment of patients with COVID-19 has been uncharted territory, with medical doctors experimenting with a cocktail of drugs, here and abroad, as patients suffer excruciating pain and survived with steely resolve.

There is still a lack of consensus within the medical fraternity.

Last year, local doctors and pharmacists clamoured for increased supplies of Remdisivir – one of the drugs used in treating then United States President Donald Trump when he was stricken with the disease. But those appeals faded after international studies found that Remdisivir did not have any provable impact on the recovery of coronavirus patients.

High-profile members of the medical fraternity, including Dr Andrew Manning, leading representative for the island’s consultant physicians, have since February called for the incorporation of the drug Ivermectin in the COVID-19 management strategy.

As recently as May, eight senior doctors penned a letter to Minister of Health Dr Christopher Tufton, increasing pressure on the Holness administration to give the green light to Ivermectin.

“In our carefully considered opinion, the available data on Ivermectin is quite adequate. There is no need to await the outcome of further trials. Any call for local trials prior to approval is unnecessary, as neither time, resources, nor ethical approval would permit,” the missive read.

Jamaica has vaccinated around eight per cent of its population – a far cry from the 70 per cent, or 1.9 million, projected by March 2022. Inoculation of its most vulnerable is lagging by more than 97 per cent.

Tufton is aware that the panic in February and March – when deaths and infections soared – has now subsided.

“I am concerned that there will be the temptation to be complacent with relaxation of the rules. We must guard against that,” he told The Gleaner on Sunday.

“... Every death is regrettable, but we should also note that we have had deaths as a percentage of population less than the global average. So our heath system has saved many more lives than we lost as a result of the response.”

Tufton and Prime Minister Andrew Holness have chastised wealthier countries for hoarding vaccines – a rebuke that has formed part of the global mass appeal that is finally getting the United States and Europe to commit to donating hundreds of millions of doses to low- and middle-income countries soon.

The health minister is still defending the Government’s policy of only using vaccines approved by the World Health Organization, putting off suitors from Russia, India, and China.

“It would risk destroying general confidence in our immunisation process, confidence built up over decades, and a major contributor to our human development as a country. I am confident we have done the right thing, and those who think otherwise, I humbly suggest, are not fully considering the implications of such a decision,” Tufton said.

Parish No. of Deaths