Merl Grove gets off 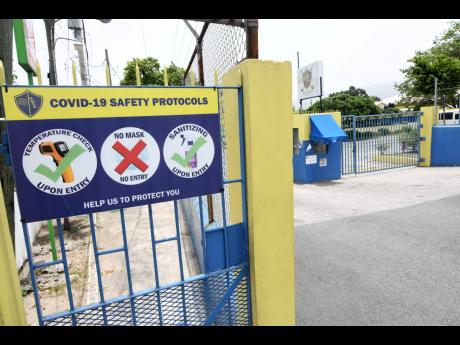 Administrators of Merl Grove High School have been cited and warned for breaching the Disaster Risk Management Act when it hosted a valedictory service for its sixth-form cohort in contravention of gathering limits and social-distancing laws last...

Administrators of Merl Grove High School have been cited and warned for breaching the Disaster Risk Management Act when it hosted a valedictory service for its sixth-form cohort in contravention of gathering limits and social-distancing laws last week.

Minister of Education Fayval Williams told The Gleaner on Sunday evening that principal Dr Marjorie Fullerton has been ordered not to engage students in any further events of that nature and that they should only be accommodated in the auditorium in specific numbers for examination purposes.

The ministry will also issue a follow-up letter to Fullerton and board Chairman David Hall, but no punitive sanctions are likely even though the ministry rejected outright the explanation offered by the principal for the mass gathering.

“The matter was brought to the attention of Education, Youth and Information, and this prompted an immediate investigation by us to ascertain the full understanding of the circumstances around the event,” the minister disclosed.

Williams said that the principal confirmed that the school hosted a June 10 valedictory service for final-year students and blessed the girls as is customary because the institution is church owned.

The principal indicated that the valedictory service was significant in the life of the students, the minister said.

But troubling evidence has emerged that the valedictory service was not a one-off oversight.

Fullerton’s actions appeared to have been a compass emboldening some senior staff, including a grade coordinator who issued a terse email that bordered on a threat.

In a June 11 missive that warned students that attendance at an assembly last Friday was mandatory, the senior teacher said that her email directive would be “very short but absolutely intentional”.

“Students who are absent without a sick note will be called into a disciplinary meeting with the principal and will not be allowed to continue the programme into next year.

“Prefects who are absent will be stripped of their status immediately, including on their files,” the correspondence read.

Concerned parents and staff have indicated that Fullerton’s leadership has been marked by a cavalier approach to COVID-19 management, with accusations aplenty.

Several stakeholders with whom The Gleaner spoke on Sunday –all requesting anonymity for fear of recrimination – disclosed that when Merl Grove hosted a Child Month activity on the school’s lawn in May, there was no adherence to social distancing, mask wearing, or sanitisation.

Williams said that the ministry was advised that the auditorium was constructed to accommodate up to 3,000 persons and that the layout was done with six-foot spacing between participants, with some 250-300 students in attendance.

Williams was further advised that the service commenced at 8 a.m. and ended at 9:15 a.m. and that the students left the compound immediately afterwards.

“Obviously, the 250-300 students in an auditorium, regardless of the size auditorium, is a violation of the Disaster Risk Management Act, particularly the gathering rules which allow no more than 10 persons, and for religious events, no more than 50 persons,” Williams told The Gleaner. Despite this admission, school administrators will have only received a slap on the wrist.

“In terms of action by the Ministry of Education, Youth and Information, the principal was advised not to engage students in any further events of that nature and that students should only be accommodated in the auditorium in the numbers cited for examination purposes,” the minister said, insisting that the protocols of distancing, mask wearing, sanitisation, and temperature taking must be enforced.