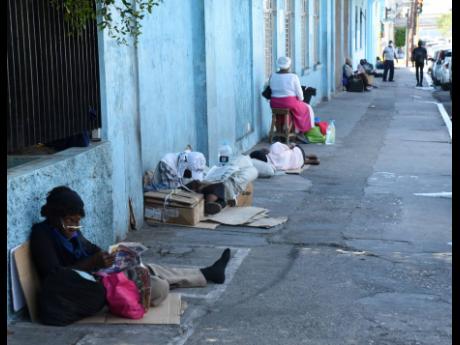 File
Homeless persons seen along Church Street in downtown Kingston on May 4. Six homeless people have died after targeted attacks.

A homeless man who was among four street persons who were viciously attacked and injured in sections of the Corporate Area in May has succumbed to his injuries.

His death, however, brings to six the number of homeless persons who have been murdered in two separate targeted attacks in 2021.

In the meantime, a suspect who was taken into custody in relation to both incidents is yet to be charged.

Efforts to get a comment from head of the Corporate Communications Unit of the Jamaica Constabulary Force, Senior Superintendent of Police Stephanie Lindsay, on the investigation and whether the suspect will be charged was not forthcoming up to news time.

The suspect was first arrested following the January brutal attack on six homeless persons who were chopped in the head. Only one survived.

The suspect was, however, released because of insufficient evidence.

But following the May 2 attack on four other homeless persons, he was again detained.

Lindsay told The Gleaner then that the man had been taken in for questioning as the police believed that he had information that could assist in their investigation.

In the May attack, two of the victims were attacked along Tom Redcam Drive, one along Ivy Green Crescent, and another in Silver Slipper Plaza in Cross Roads.

The men, who were bludgeoned in the head while they slept, were admitted to hospital.

Three were released, but the fourth, who was reported to be in critical condition, succumbed to his injuries last week.

In the first incident in January, six homeless men were attacked and chopped in the head. Four of them died on the spot and a fifth succumbed to his injuries.

The frightening attacks on the homeless have sparked outrage in society, triggering condemnation from civil and church groups and calls from Opposition Leader Mark Golding for immediate action from the Government.