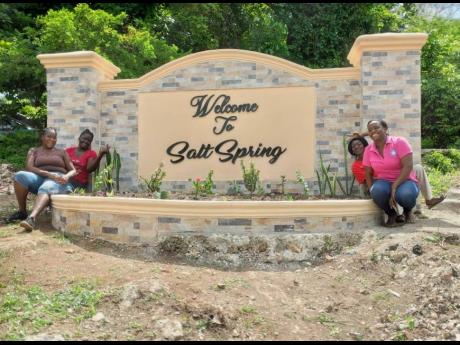 Contributed
Therisha Rose-Lawrence (right, foreground), president of the Salt Spring Community Development Committee, poses for a fun photo with other volunteers after planting flowers at the entrance to the St James community.

Therisha Rose-Lawrence no longer lives in Salt Spring in St James, but as president of its Community Development Committee, she is motivated each day to help spark changes that will improve the lives of residents there.

Just yesterday morning, she, along with several other volunteers, took some time to plant flowers at a welcome sign that was recently constructed. Driven by her desire to transform the area where she spent most of her childhood, Rose-Lawrence continues to advocate on the residents’ behalf for resources and have meetings regularly with them, along with other stakeholders. These meetings are now hosted online due to the pandemic.

“I think there are more opportunities now, especially for the youths and young adults, compared to when I was growing up,” said Rose-Lawrence, who relocated from the community about two years ago.

Several persons have lost their lives in the community over the years to gun violence, but by partnering with youth clubs, churches, police, schools and agencies like the Jamaica Social Investment Fund (JSIF) and the United States Agency for International Development (USAID), positive changes have been evident.

“There is always work to be done, so we had an uproar a few weeks ago, but things have been calm again since,” she said.

Rose-Lawrence was among 26 Jamaican community leaders who participated in a six-module training series in social and behavioural science (SBS) for violence prevention. The initiative was conducted under USAID’s Positive Pathways Activity in Jamaica project.

The SBS training focused on identifying and diagnosing causes of behavioural problems; designing and implementing behavioural solutions; as well as testing and evaluating SBS-led interventions. The weekly one-hour online sessions were conducted between April 20 to May 25, and were facilitated by Dr Laura Van Berkel, a Democracy International technical specialist in SBS.

Consultant at the Violence Prevention Alliance, Colleen Wint-Bond, is among those who found the sessions very useful.

“In little bits and pieces of work I do throughout the week, I recall elements from the sessions,” she said.

Organisations that completed the course are now eligible to receive a USAID-sponsored SBS Implementation and Integration Grant, which will allow them to apply their knowledge and skills in targeted communities. The grants will be awarded to multiple organisations, with a maximum value of J$750,000 per award.

Positive Pathways is a USAID-funded five-year community violence-prevention activity that was launched in March. Grants valued at US$5 million will be disbursed under the initiative which is aimed towards building the resilience of targeted communities, youth, and their parents, as well as develop positive avenues for youths to prevent them from engaging in criminal activity.