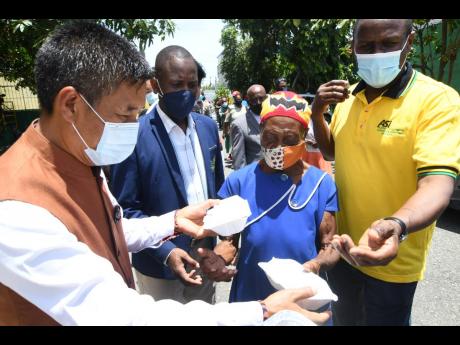 Jamaica’s emerging sole manufacturer of PVC pipes is set to employ between 60 and 75 new workers at its Clarendon-based plant. FosRich will make its debut in the production of PVC accessories in the next two weeks. The electrical lighting and...

Jamaica’s emerging sole manufacturer of PVC pipes is set to employ between 60 and 75 new workers at its Clarendon-based plant.

FosRich will make its debut in the production of PVC accessories in the next two weeks.

The electrical lighting and energy company made its foray into the manufacture of pipes two years ago and is now seeking to expand its PVC line with the production of fittings and industrial pipes, which will include elbows, couplings, caps, adapters, and larger standard dimension ratio pipes.

The new line of production will operate from the 120,000-square-foot plant located in Hayes, Clarendon, where the company currently repairs transformers through a fairly recent partnership with the Jamaica Public Service Company (JPS).

“We have been pretty aggressive in this period of time even though we see where COVID is making a lot of people becoming more jittery and concerned,” Cecil Foster, managing director of FosRich, said on Sunday.

“Most of the people that we will be employing will be coming from Hayes, and so we are really looking forward to giving the area a little boost of employment of young people,” said Foster, speaking with The Gleaner on the sidelines of the Indian High Commission’s handover of food to the needy at Good Samaritan Inn in Kingston.

Foster is deputy chairman of the Adventist-operated welfare facility.

Initial test manufacturing of PVC pipe fittings will begin this week, but official production will commence in mid-July.

Foster, however, indicated that the company is seeking to attract skilled workers in electrical installation, production, and customer service who have Level Three HEART certification.

The company has already identified most of the recruits.

“This is a major thing for the company, and I think in another year to two years, it will be the largest business line that we do in our business,” Foster said.

FosRich is eyeing exports and is currently working with overseas partners to help market its products in the Caribbean.

Additionally, Foster said that the company is liaising with state investment arm JAMPRO to find markets in the Caribbean.

“We are hoping that we can do so in the next six to eight months,” he said.

Fosrich’s move into PVC pipes and fitting production, as well as transformers repair, is a natural progression from the company’s initial core business of selling electrical components and its involvement in major projects.

The company entered the manufacturing arena with the pipe-making plant at Maverley in Kingston last April and signed a four-year renewable contract with JPS last July to repair more than 1,000 transformers yearly of the 40,000 deployed throughout the utility company’s network.