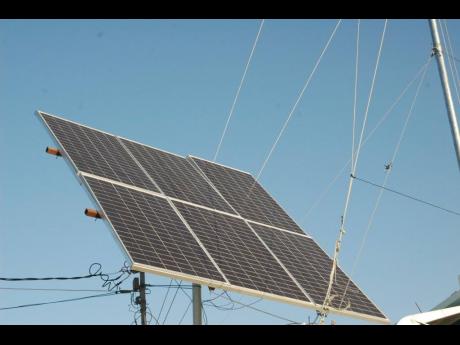 File
Stakeholders in Jamaica's solar industry are bristling at the imposition of GCT on energy-efficient batteries.

Frustrated stakeholders in the island’s solar energy sector lobbying for a tax break on the import of newer-type batteries say they are suffering from government inaction and are warning that the country will not meet its 32 per cent target for...

Frustrated stakeholders in the island’s solar energy sector lobbying for a tax break on the import of newer-type batteries say they are suffering from government inaction and are warning that the country will not meet its 32 per cent target for renewables by 2030 if nothing is done.

At the heart of the contention is the fairly recent levy of 20 per cent general consumption tax (GCT) on lithium-ion and lithium ferro phosphate batteries used in solar energy systems.

Equally vexing is the 20 per cent Common External Tariff (CET) on the batteries that had been suspended for three years, but that order expired in April and is yet to be reinstated, leaving the stakeholders facing a reportedly crippling 43-45 per cent tax burden.

President of the Jamaica Renewable Energy Association (JREA), Alex Hill, who has met with the energy, finance, and commerce ministries, as well as the Jamaica Customs Agency (JCA), said that the industry interests have been ignored by the Holness administration.

“The renewable energy sector is in a perilous state, as all imports of photovoltaic components have suddenly been charged 20 per cent duty and all lithium batteries to be used as part of renewable energy systems are being charged an additional 20 per GCT,” Hill told The Gleaner.

“There was no public notification for these changes and importers were simply forced to pay increases taxes when the container landed in Jamaica or leave them at the port,” he added, disclosing that one importer now has a shipment with a $7-million clearance price tag.

Further, Hill pointed out that the CET exemption afforded by the Council for Trade and Economic Development (COTED) was not filed for in time by the Government, leaving the importer in a disadvantageous position.

“How can you be applying for an exemption after the exemption time has elapsed? That makes no sense!” he remarked.

Hill said that three years ago, the ministry also had to seek an extension of the exemption.

According to the JREA president, importers had for years being bringing in the energy-efficient batteries without GCT. However, all that changed over the past year when Customs started collecting 20 per cent GCT on the lithium-ion and lithium ferro phosphate batteries.

At the same time, Hill explained that that was being done arbitrarily but since last December had become more consistent.

“Government is levying 20 per cent when battery technology is at its best making it harder for persons to invest,” Hill told The Gleaner.

“But more Jamaicans are not able to invest in this technology because of the tax that is being placed on it which makes no sense. We are supposed to be incentivising people to invest in renewable energy, not tax,” Hill said.

Hill said that the current tax policy was inconsistent with the Government’s vision of market penetration of renewables by 2030.

He emphasised that the JREA was not asking for special treatment, noting that the policy to exempt renewable inputs sought to reduce the dependence on oil and gas and to encourage cleaner energy.

“So for you now as a government to tax more efficient batteries which are cleaner for the environment, because they are not made from lead, it doesn’t make sense,” Hill said.

One solar energy business owner whose shipment was detained last December and GCT imposed told The Gleaner that she is now forced to bring in older batteries that are environmentally unsafe.

The retailer said that the majority of her clients were residential customers and could not afford lithium batteries. A lithium-ion battery costs between US$7,000 and US$10,000.

“People are thinking of using newer technology, but are being held because the Government is seeking to collect revenue over pushing a renewable-energy industry in Jamaica,” the woman, who requested anonymity, said.

Meanwhile, the Ministry of Science, Energy and Technology (MSET), in response to Gleaner queries, explained that 14 renewable energy and energy-efficient technology items and lithium-ion batteries had been benefiting from 20 per cent CET suspensions from COTED from May 2013. Those waivers expired in April 2021.

The ministry said it has been making representation to the finance ministry for the suspension of CET.

At the same time, the energy ministry said that it was not responsible for the classification of the batteries and most energy and energy-efficient items imported to Jamaica, which is done by the World Customs Organization.

However, it said “MSET is cognisant of the financial implications of the expiry of the previous three-year CET suspension on specific renewable energy and energy-efficient technology items for technology importers at this time”.

The JCA, in its response to questions, said that it was not in its remit to determine what imports are to be taxed and that its function is to collect all duties and taxes based on the provisions of the relevant legislation.

It also rubbished as false reports that it arbitrarily collects GCT on lithium-ion batteries.