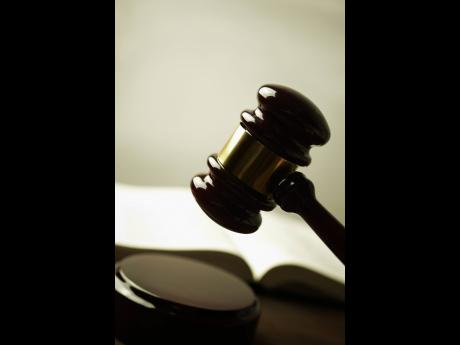 The escaped prisoner, who says that it was never his intention to kill the policeman, after disarming and shooting the cop, yesterday apologised to the injured officer and begged him and his family for forgiveness.

The 30-year-old convict, Ricardo ‘Kaka’ Richards, who had escaped with the policeman’s weapon, also apologised to the public and to the State via a letter read by his lawyer, Earnest Davis, as he was too nervous to read.

The content of Richards’ letter was shared yesterday during his sentencing hearing in the Home Circuit Court where he was slapped with a 22-year prison term at hard labour.

Justice Sonya Wint-Blair, in sentencing the father of two, ordered him to serve 22 years for wounding with intent and 13 years and four months each for the offences of illegal possession of firearm and robbery with aggravation. The sentences are to run concurrently.

The officer was injured on March 12 in a daring daylight escape at the National Chest Hospital in St Andrew, after he and two others had taken Richards there to do an X-ray.

“I don’t know what got over me and cause me to commit this crime; I am asking please madam for another chance in society. I am asking on behalf of my two children.

“I recognise what I did was very wrong and not a good example for my two children and also the children of the society,” he said in the letter.

According to Richards, his penitence was “from his heart”.

The injured cop, in the victim impact statement, did not say how he feels about forgiving Richards.

But the constable, who was doused in the eyes with chemical, said he could not forgive him, as he had protected Richards when he was being preyed on and assaulted in prison and had placed him in a cell by himself.

The officer, who said he was still experiencing pain in the eyes and was unable to see in bright light, said he did not expect that level of aggression from Richards given their relationship. He also indicated that he would not be happy if Richards’ sentence was less than eight years.

Meanwhile, the still-traumatised officer, who was shot and suffered a fractured spine, said he has lost 25 pounds since the incident and is unable to walk properly.

Added to that the cop said he has a current-like feeling in his left leg which has affected his ability to have a full night’s sleep.

The officer said he was struggling to pay his bills as he was unable to do his side job.

Before the sentence was passed, Richards’ mother begged the court to extend mercy for the sake of his four-year-old daughter, who is motherless and misses him.

Richards could be seen fighting back tears as his mother spoke about his young daughter.

Davis, in his plea-in-mitigation, beseeched the judge to think of his client’s ability to rehabilitate and not to bow to public pressure and impose a sentence that would serve more as a deterrent to others.