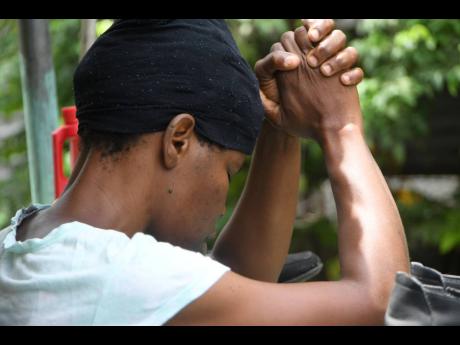 Rudolph Brown/Photographer
Carolyn Smith in prayerful contemplation on Monday. Her son is on the run in relation to the death of his uncle, Joseph Smith, in Sandy Park, St Andrew. 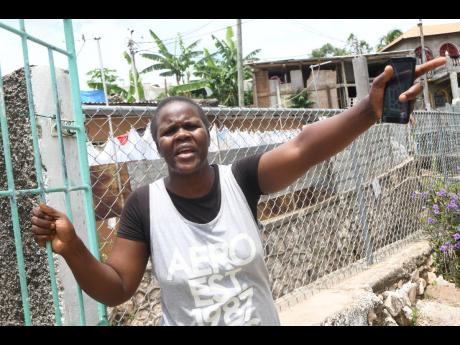 Rudolph Brown/Photographer
Ingrid Heath is urging her nephew Germaine Richards to turn himself in to the police.
1
2

A St Andrew family is heartbroken after 37-year-old Joseph ‘Jojo’ Smith was killed on Saturday, allegedly by his nephew. The distraught family is pleading with Germaine ‘Kareem’ Richards, 20, who has been identified as the suspect, to turn himself...

A St Andrew family is heartbroken after 37-year-old Joseph ‘Jojo’ Smith was killed on Saturday, allegedly by his nephew.

The distraught family is pleading with Germaine ‘Kareem’ Richards, 20, who has been identified as the suspect, to turn himself in to the police. Negotiations to have Richards report to the police have not been successful so far.

The Sandy Park home where the men lived was heavy with grief and regret on Monday as the family recalled that the two had been at loggerheads for about two years.

The latest dispute was reportedly sparked by a reprimand of Smith’s daughter.

Smith reportedly punched Richards in the face and threatened him with an ice pick. Richards is said to have left the house but returned sometime later.

Smith was shot in the chest and abdomen and died at the University Hospital of the West Indies while undergoing treatment.

Coreen Marsh, 61, Smith’s mother, said that the two men have “kept to themselves” over the past few years.

Marsh said that she tried to stop Smith from confronting Richards on Saturday but was unable to quell his wrath.

“To me, I had already feel say he died from he got the shot. You know, you can feel a thing,” she said with sadness.

Lenford Sammuel Smith, father of Joseph Smith, was philosophical that his son’s death was destined to happen.

“It was to happen Saturday; it wasn’t to happen any other time,” said the elder Smith, who was reportedly conducting baptism at the time of his son’s death.

Richards has been dubbed a “miracle baby” – having survived a shot to the head when he was nine months old.

“Me rush with him go a hospital and me pray for him [that] no matter what, me nephew can’t dead, him must live,” said Ingrid Heath, Richards’ aunt, recalling the incident.

Heath said that the family will not condemn Richards but urged him to face a court of law.

“What we want is for him to bring in himself because him have to pay the consequence. You cah spread your bed and don’t want to lie in it,” said Heath.