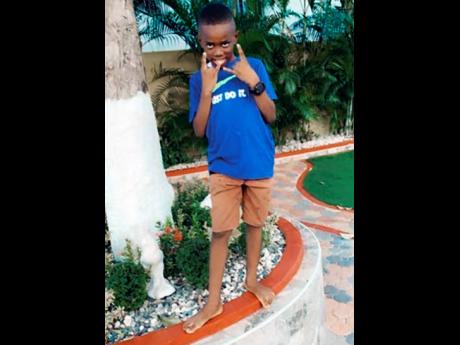 Upcoming artiste Prince Ikeem is a broken man. His best friend, confidant and son Jahiem Bogle yesterday succumbed to injuries he received on Thursday after being shot in his head while riding his bicycle in Arnett Gardens.

Prince Ikeem, birth name Akeem Bogle, told The Gleaner that his 10-year-old son was his everything.

“Every day we make bare video together,” Bogle told The Gleaner as he wept openly.

Their last video was recorded at 9:36 a.m. on Thursday and he was shot later in the afternoon.

“The rest of my life nah go easy enuh. A nuh mi son alone, a mi best friend. Him live with me,” Bogle said, surrounded by his immediate family.

He is struggling to come to grips, blaming himself that he failed his son.

The youngster wanted to attend Kingston College like his dad and he had a passion for singing.

Jahiem’s mother Monique Estrene, a security guard, said she has not shed a tear as yet.

She revealed that it was just Tuesday Jahiem sent her a text message saying “Mommy I love you”.

“Is a promising young youth. When him a do online class, the teacher light gone and a him did a teach the class. Teacher said she proud of him. The hottest thing him soon gone foreign because his stepmother is filing for him,” Estrene said.

She was concerned for Jahiem’s father because she acknowledges the bond they shared.

“A mi baby father one child. His mother dead year before last and now him son come dead. A mad him ago mad, mi nuh know how him ago manage,” Estrene lamented.

The distraught mother said she had seen the crime and violence tearing down communities across the country but never knew it would reach her doorstep.

Bogle was at the scene of the shooting and had to take cover as the shots rang out.

“Mi only hear when somebody scream out, ‘a Ikeem son’… me tek him up and a say this can’t be real, blood a flow out his head and mi affi put mi hand over it. Him a try call mi daddy but it nah come out,” Bogle said as he ran with him, seeking a transport.

Bogle told The Gleaner that prior to Thursday, he and his son did not go outdoors for any prolonged period and bonded indoors mostly.

The police say a high-level probe has been launched into the killing of Jahiem.

It is reported that about 5:30 p.m., Jaheim, a former Iris Gelly Primary student, was riding his bicycle along Curry Pathway near Collie Smith Drive, when several explosions were heard.

When the shooting subsided, the boy was found suffering from a gunshot wound to his head.

He was rushed to the Kingston Public Hospital where he succumbed to injuries Friday morning.

The police are appealing to anyone with information to contact the Denham Town Police at 876-922-6441, Crime Stop at 311 or the nearest police station.