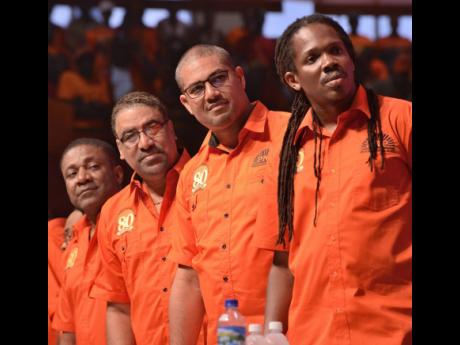 In a joint resignation statement announcing the departure of the quartet from their respective positions, it was also stated that Phillips, who was recently nominated for another shot at a vice president position in upcoming internal elections, had also withdrawn his nomination.

While the statement claimed that the resignations were done to “avoid a further widening of the internal rift” and “another divisive internal election”, it also zoned in on what appears to be a lack of effort by the leadership to embrace party unity and also intimating that old wounds from the last leadership race have not yet healed.

“Despite all the reasonable efforts to broker a platform of unity, there were otherwise covert attempts to sabotage the goal of peace and harmony with a plan to hoard the available positions in line with previous public statements made by the leader, who pronounced a lack of trust for persons who did not support him in his campaign leadership and his preference to surround himself with only individuals who overtly endorsed his candidacy,” the statement said.

Former party stalwart K.D. Knight, who has been observing the latest developments, said that while what was happening could be perceived as disunity, it could also be an important step towards the betterment of the party, especially since those who have resigned have intimated that they would be focusing on working at the constituency level.

“What I understand them (those who have resigned) to be saying is that the leader’s bent is to have around him persons who he knows as a fact supported him. Now if that happens, then that can fuel disunity at the top and if it is seen that there is disunity at the top, then it is going to filter down,” said Knight during a radio interview shortly after the resignation statement became public.

However, in a subsequent release from the PNP, acknowledging the resignation statement of the quartet of former leaders of the party, the tone of the statement not only suggested disappointment but there was also a hint that there might be internal repercussions.

“Certain allegations were made in their resignation letter which are not accurate; however, these will be dealt with in the appropriate party forum,” said the statement, which appeared to have been authored by the party’s general secretary, Dr Dayton Campbell.

In direct response to the resignations, the party’s president, Mark Golding, was quoted as saying that an attempt was made to have dialogue as it relates to issues raised by Crawford, McNeill, Phillips and Paulwell, but it did not yield the desired results. He also expressed a willingness to work with the quartet in the best interest of the party.

“Discussions with respect to the four vice-presidential candidates were attempted, but unfortunately these did not lead to consensus. It seems that the response of these four officers was to resign en bloc,” Golding stated. “While I am saddened by this action, their resignations are accepted. Nevertheless, I remain willing to work with these senior Comrades in the best interests of the party.”

“I also reaffirm my commitment to building unity in the party, acknowledging that we all have important roles to play in achieving this. Jamaica needs the PNP more than ever, as hardships and insecurity stalk this land under the JLP Government. I will continue to stride forth with all willing Comrades as we build back our party.”

It would appear that the rebuilding that Golding said he wanted to see has already begun as the party confirmed late yesterday afternoon that the four vice-presidential nominees, Norman Scott, Eugene Kelly, Ian Hayles and Richard Azan, who were nominated unopposed, would automatically fill the positions, pending official ratification.