Sources: embattled couple to tie the knot; Wright: no comment 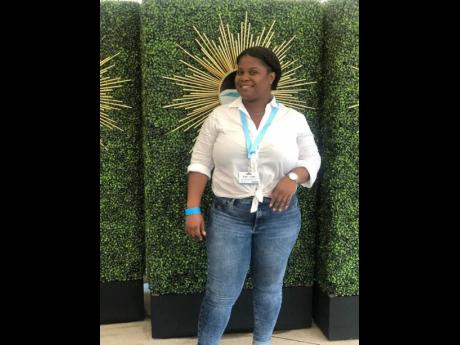 Embattled politician George Wright is to tie the knot with his lady love Taneisha Singh “in coming weeks”, sources close to the independent member of parliament (MP) for Central Westmoreland have told The Sunday Gleaner. However, Wright has refused...

Embattled politician George Wright is to tie the knot with his lady love Taneisha Singh “in coming weeks”, sources close to the independent member of parliament (MP) for Central Westmoreland have told The Sunday Gleaner. However, Wright has refused to publicly comment on the reports.

Wright and Singh have been at the centre of public speculation since a video surfaced in April showing a man beating a woman with his fists and a stool. The police had sought Wright as a person of interest in the matter, but would later close the case, as neither Wright nor Singh was interested in pressing charges following their initial domestic-abuse report to the police, and the video footage was inconclusive as to the parties involved.

Wright has neither admitted nor denied any wrongdoing.

With public pressure mounting, the first-time legislator resigned as a member of the Jamaica Labour Party (JLP), but Wright has rejected all calls to give up his role as MP for the one-time People’s National Party (PNP) stronghold and has since made several official appearances as an independent representative, including with Singh by his side.

“The plan is for them to show a united front to the public, with the hope that the [video issue] will go away,” a close source to the couple told The Sunday Gleaner. “An official ‘I do’ could be happening in the coming weeks.”

Bishop O’Neil Russell, a close friend of the couple and pastor of the Ark of the Covenant Holy Trinity Church in Savanna-la-Mar, said the two had discussed marriage in the past.

“They will not leave each other; they are not going to,” Russell said. “She had been there and Mr Wright’s children respect her, so whether he wants to marry or not, their intention is not to leave each other, but to live together.”

Although when contacted Wright refused to confirm the wedding plans, The Sunday Gleaner understands from his close friend that only the couple’s inner circle will be invited to the very private event.

Looking back on the day of the controversial incident, Bishop Russell, who lives on Coke Street, a JLP stronghold in downtown Savanna-la-Mar, Westmoreland, told The Sunday Gleaner that the couple was in the community just before the episode reportedly happened.

“The lady (Singh) was here doing her hair. They spent almost all day here before the alleged incident took place. They were in very good spirits,” he recalled.

He claimed that when the video was made public, he immediately contacted MP Wright.

“I called him because I saw a video, somebody deliberately tagged me in the video, and I called Mr Wright and said I saw a video with somebody looking like…,” he said, stopping short of calling a name. “He said ‘Pastor, give me a few minutes and I will call you back’, and I shared the video with him. He called me back and we spoke about it.”

The bishop said he had also gone to Montego Bay and discussed the matter with Taneisha Singh. “She is still the common-law wife to George, she is still doing everything,” he noted.

Russell said the MP continues to enjoy the support of the nearly 1,000 registered voters in the unplanned seaside community, but admitted that some of the women in the constituency were not pleased because of the video.

Bishop Russell said Wright, who polled 8,477 votes on a JLP ticket last September to wrest the Westmoreland Central seat from PNP incumbent Dwayne Vaz (7,288 votes), is focused now on developing the community, and that the constituents want him to remain as their MP.

Russell has not written off a return of his MP to the JLP, but is committed to supporting him.

In a recent interview with The Sunday Gleaner, Dr Horace Chang, JLP general secretary, spoke of Wright’s extensive network in the Central Westmoreland constituency, and even suggested that as an independent, his support could increase.

“As an independent, he may get more approaches from a wider cross section,” Chang said. “He is not a charismatic platform politician, but he is a person who gets around in the constituency, which is why he got elected.”

He added, “When an MP is elected, he is supposed to represent the whole constituency, so although he is now in an independent, there might be personalities from both PNP and JLP who would naturally give their support.”