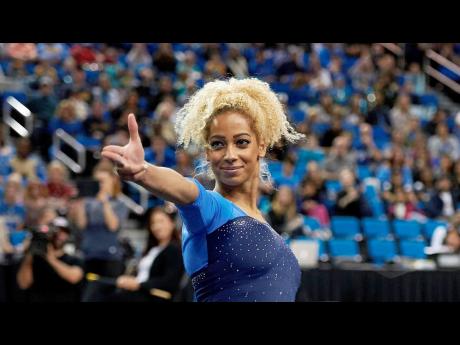 Jamaican gymnast Danusia Francis’ Olympic dream suffered a major shock after she suffered a knee injury, which has ruled her out of the artistic gymnastics competition at the Tokyo Olympic Games.

Francis, who first announced the news on her Instagram profile, will only compete in the bars and will receive assistance from her coach with dismounting.

The 27-year-old England-born gymnast, who became only the second person from her sport to qualify to represent Jamaica at the Olympic Games following on the heels of Toni-Ann Williams’ competition at the Rio 2016 Games, says she was extremely upset by the turn of events, but says she still wants to ensure that she leaves the Japanese city with a positive experience.

“It is very upsetting but I just have to try and be grateful that I made it here and ensure that I enjoy the rest of my experience,” Francis told The Gleaner.

Francis, who was expected to feature in the artistic gymnastics qualifications at the Ariake Gymnastics Centre tomorrow, says she will execute a straightforward routine when competition in the women’s uneven bar discipline starts on August 1.

“Yeah, I will just do a simple routine, whatever is safe that I can do to still represent,” Francis shared.

“Well, Danusia is a super positive young lady. Though she is disappointed, she still wants to do something out there and has decided to do the bars with the help of her coach to land. Clearly, the injury is serious and as she said, she doesn’t want it to get damaged any further as she looks to represent Jamaica at other events,” said Grant-Brown.

After impressing in the first two of three Olympic Qualifiers for UK gymnasts, Francis scored poorly in the deciding leg and missed out on a spot on the British team for the 2012 Olympic Games in London and later switched her allegiance to Jamaica, the country of her father’s birth.

She secured her ticket to the Tokyo Olympics way back in 2019, after scoring 50.982 in the qualifications at the 2019 World Championships, to finish 47th overall and receive and individual qualification spot to Tokyo 2020 by virtue of finishing in the top 20 among athletes who were not on a qualifying team. She ranked ninth among that group of competitors.