PNP activist says she has no money to pay court fine 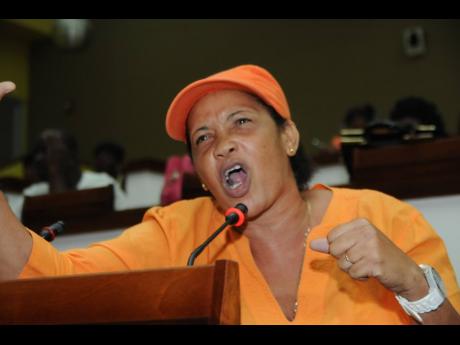 Controversial People’s National Party (PNP) activist Karen Cross, who was last week given two weeks to pay a $750,000 fine for contempt of court, says she does not have the money to pay the fine and is seeking help via a GoFundme account to accumulate the sum.

The fund, titled ‘Help Karen Cross Legal Defence’, was set up on Saturday and is targeting US$6,000 in 10 days.

The sanction was imposed by the judge after both women, who are being sued by PNP General Secretary Dr Dayton Campbell for defamation, breached a court order, instructing them to remove all defamatory posts from their social media accounts and not repost any further defamatory material.

The defamation lawsuit arose after both women reportedly made posts alleging serious criminal conduct by Campbell.

Cross, when contacted yesterday about the GoFundme account, confirmed that it had been set up on her behalf for the purpose of raising funds for her defence and for paying the court fine.

“I can hardly find food to feed the pickney dem I have,” she added.

According to her, the judge imposed the fine without any consideration as to whether she could afford to pay.

“This judicial system in Jamaica is rigged against poor people, and is about time that poor people start recognise it and stop accept it,” she added.

But even as Cross tries to raise the funds to pay the fine, her attorney-at-law, Robert Collie, has indicated that he is going to appeal the fine.

According to Collie, his clients were without legal representation when the order was made in April by the judge and should have had the benefit of a counsel.

Further, he said, his clients did not fully understand the order even though ignorance of the law is not a defence.

The sex allegations made by Cross were investigated by the Jamaica Constabulary Force, which, in April, said it found no supporting evidence.

Campbell, in his defence, has rejected the allegations as fabrications and malicious attempts to soil his reputation.

In his address on Saturday at the Central Manchester Annual Constituency Conference at Manchester High School, a Bible-quoting ‘preaching’ Campbell compared his situation being faced to that of Job.

“Love them that hate you and them that persecute you,” he said while stating that he had no ill will towards anyone and was simply trying to clear his name.

Campbell said that he was born and raised in the Church and pointed out that he had even, at one point, considered going to Bible school.