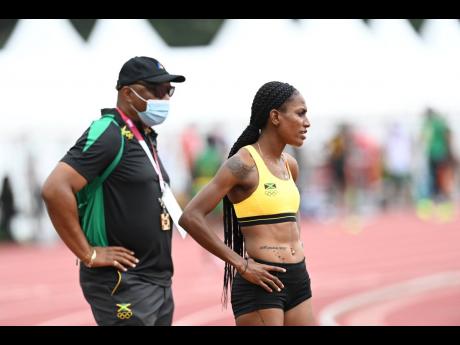 Gladstone Taylor/Multimedia Photo Editor
Akimbo on the double: Head coach Maurice Wilson and 400m hurdler Ronda Whyte are seen at the warm-up track at the Tokyo Olympic Stadium on Monday. 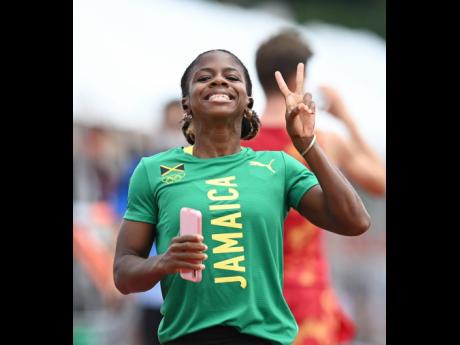 With a number of medal magnets missing from Jamaica’s track and field team for the first time since the country’s golden era began in 2008, one of the island’s youngest groups to an Olympic Games will be charged with maintaining the double-digit haul locals have been accustomed to over the past decade.

With Usain Bolt and Veronica Campbell-Brown now retired, Asafa Powell and Nesta Carter in the sunset of their careers, and Omar McLeod failing to make the team, Jamaica has a vacuum of big names from the final list submitted for the Tokyo 2020 Games.

While star performers such as Shelly-Ann Fraser-Pryce, Elaine Thompson Herah, Shericka Jackson, and Shaneika Ricketts are all expected to bring home medals, head coach Maurice Wilson and his management team are in a race against time to get the less experienced athletes sufficiently conditioned to meet the weighty expectations.

Fifty-nine per cent, or 33, of Jamaica’s 56 registered athletes in Tokyo are at their first Olympic Games, with 15 from that group of Olympic rookies making their first trip to a major senior international competition.

“This is the first time I’m seeing so many new Olympians and so it requires, as I have been saying from very early, a management team that has numbers, because a lot of them need individual attention,” Wilson told The Gleaner.

“But we know how it is in terms of the numbers and the Olympics and so on, but I am hoping that the relevant authorities, those persons that are in charge, will make the necessary representation in terms of officials per team.”

The veteran coach said the team will be making most of the presence of sports psychologist Dr Scott Hamilton, who is part of the Jamaica Olympic Association (JOA) delegation, to help with mental preparation.

“We have a lot of youngsters and they are in awe, based on what they have seen so far. I cannot say exactly what will happen and what the effects are going to be, because we have only gone through a few sessions,” said Wilson, who, during his time in charge of Jamaica’s teams at major championships, has seen many trainees develop into titans on the world stage.

Wilson would not be drawn into sharing a medal prediction or target, but noted that he expects another strong showing from Team Jamaica in Tokyo. National pride is an intangible that could tip the scales for extraordinary performances, he said..

“My predictions are internal. I would normally wait until the start of the meet, look at the rounds, and then I make a prediction. There are so many factors and variables that are involved,” said Wilson,

“But I do think that we will perform well, irrespective of all the factors that persons may consider to be negative, in terms of not having a camp and so on.”

Though Jamaica’s investment in facilities and amenities may be dwarfed by wealthier countries, the island could further burnish its outsize reputation as a world-beater. But victory will not be handed on a platter, Wilson warned.

“A successful championship means that we will get medals. There are no medals put out there for us. It doesn’t matter if you have the top three or four persons in the world. On that day, they have to come and deliver,” he said.