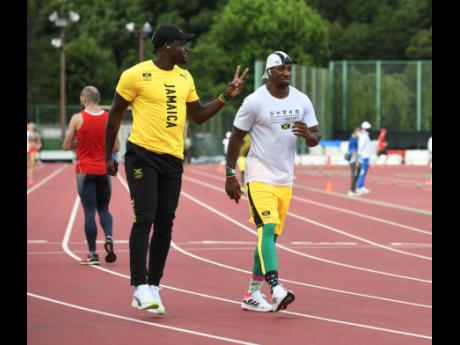 TOKYO, Japan: With track and field action set to take centre stage at the Tokyo 2020 Olympic Games starting on Friday (Thursday night Jamaica time), Jamaica’s coaches and management team are still scratching their heads about the composition of the...

With track and field action set to take centre stage at the Tokyo 2020 Olympic Games starting on Friday (Thursday night Jamaica time), Jamaica’s coaches and management team are still scratching their heads about the composition of the country’s sprint relay teams at the championships.

A cut in allocations for relay pools, a tight schedule, and heavy workloads, particularly for the female sprinters Shelly-Ann Fraser-Pryce, Elaine Thompson Herah, and Shericka Jackson, who will all be running the 100m and 200m events, have created a conundrum for Jamaica’s management team.

“This one is the most challenging championships ever, and I say this because of COVID-19. There are a lot of processes and applications. The most difficult part of it is the entry system,” said Watts.

Fraser-Pryce, Thompson Herah, and Jackson are joined in the women’s 4x100m relay pool by fourth- and fifth-place finishers at the National Senior Championships, Briana Williams and Remona Burchell, with Natasha Morrison, who finished sixth at the trials, listed as the alternate for the event.

This means that two of the competitors in the individual events will also have to run in the heats of the women’s 4x100m, which start two days after the 200m final. This could see the trio in the individual sprints running a potential six rounds and two relay legs in eight days.

“Normally we would have had six people for the relay pool, now it’s five. In our case, we have the three same athletes in the 100m women and 200m women, so they will now be competing in the 100m and the 200m, and two days after the 200m, they are required to run in the 4x100m relays,” said Watts.

Coach Maurice Wilson also outlined the challenges of trying to balance the limited numbers with the workload. There are a lot of permutations at play, he said, but certain variables are beyond their control.

The team has not been able to practise relay exchanges, especially for the 4x100m, and won’t expect to conduct any until the 200m races are completed, he said.

“If we do not have the bodies to run, there is nothing that we can do as a coaching staff. We are praying that if there are any issues, we will be able to resolve them,” Wilson stated.

“We cannot do anything with those persons who are going to do possibly six rounds of individual events; for example a Yohan Blake, who is doubling. So all of this will have to take place after he finishes competing.”