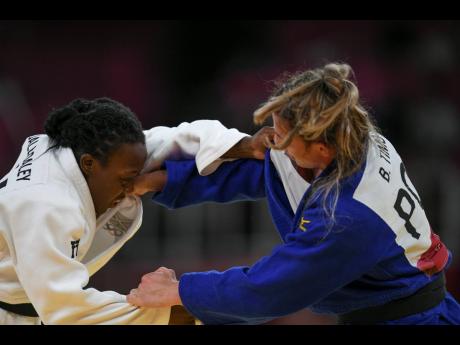 Gladstone Taylor/Multimedia Photo Editor
Jamaica’s Ebony Drysdale-Daley competes against Portugal’s Barbara Timo in the women’s -70kg elimination round of judo at the Nippon Budokan during the Tokyo 2020 Olympics on Wednesday. Drysdale Daley, who lost to Timo, is Jamaica’s first Olympian in the discipline of judo.

On the back of Jamaica’s historic participation in the judo competition at the Tokyo 2020 Olympic Games, Jamaica Olympic Association (JOA) President Christopher Samuda says the organisation aims to expand the country’s footprint in non-traditional sports at the Paris 2024 Games.

Ebony Drysdale-Daley lost to Portugal’s Timo Barbara in the -70kg competition at the Nippon Budokan on Wednesday but became Jamaica’s first-ever competitor in the event at the Olympic Games.

Jamaica has added sports like gymnastics through Toni-Ann Williams at the Rio 2016 Games and Danusia Francis at Tokyo 2020. And Yona Knight-Wisdom will dive into action in the men’s 3m springboard competition in Tokyo on Monday, following up his Rio 2016 debut.

Samuda said the JOA is committed to providing the necessary support and opportunities to ensure that the island continues to diversify its portfolio.

“It is absolutely a victory for us to have our athletes here in what people perceive to be minor sports. We are going back to the drawing board, and we are going to put in the work and will continue to invest in our athletes,” Samuda told The Gleaner.

In addition to judo, gymnastics, and diving, Jamaica is also represented in swimming (Alia Atkinson and Keanan Dols), boxing (Ricardo Brown), and, of course, track and field.

The JOA boss is targeting at least 10 disciplines at the next Olympic Games.

The plan includes providing the support and framework for the creation of Olympic squads within the various associations. These squads will be kept together and prepared for qualification.

“We have done well to be involved here, in more than five sports, which is, of course, amazing, but what we have to do now is build on that for France,” Samuda said.

“... We are going to be ensuring that there are rules of engagement for those Olympic squads because sport is now a business, and it’s a serious business. We have to take it to another level of professionalism if we want our athletes to be successful.”