Bolt eyes athletics return but not on the track 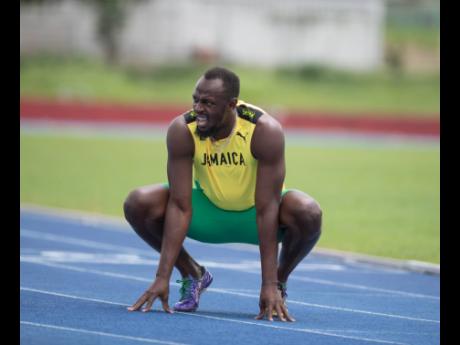 Gladstone Taylor/Multimedia Photo Editor
Olympic sprint great Usain Bolt catches his breath after competing in a Carmax promotional 800m race on July 13 at the University of the West Indies track named in his honour. The retired sprinter sputtered to a time of 2:39.

TOKYO, Japan: Retired sprinter Usain Bolt is eyeing a return to track and field but at a much slower pace. Bolt, who hung up his spikes after the 2017 World Championships in London after a decade of dominance that saw him mine eight Olympic and 11...

Retired sprinter Usain Bolt is eyeing a return to track and field but at a much slower pace.

Bolt, who hung up his spikes after the 2017 World Championships in London after a decade of dominance that saw him mine eight Olympic and 11 World Championships gold medals, and secure world records in the 100m and 200m, says he is looking for the opportunity to give back to athletics.

“I have said that if the World Athletics president wants me to do anything, all he has to do is call. I haven’t gotten the call yet,” Bolt said of Sebastian Coe.

The 34-year-old, who is considered to be the greatest sprinter in Olympic history, shared that he makes regular trips to his former training track at The University of the West Indies, Mona, to provide support to former coach Glen Mills and athletes under his guidance.

Now a father of three, Bolt spends much of his time in retirement with his family as well as on several investments, including music production.

“I have been doing a lot of music and also a lot of work with my foundation, so those are the main things I am focused on, as well as my other business ventures,” Bolt told The Gleaner.

Bolt says he is excited to see the return of athletics and the decision to push ahead with the Olympics after the coronavirus disease scuppered the hosting of the Games in 2020.

“I’m excited to see track and field back this year and I know the athletes are also excited. I know it must be tough to sit out a year so I am just looking forward to watching the competition to see who comes out on top on the day,” Bolt stated.

Bolt, who recently competed in a promotional 800m race for sponsors Carmax, said he was happy to again wear the national gear, adding that he immediately felt the Olympic fever once he saw the Jamaica kit.

The relay gold from the 2008 Games in Beijing was later lost after retested samples from one of his teammates, Nesta Carter, returned an adverse analytical finding.