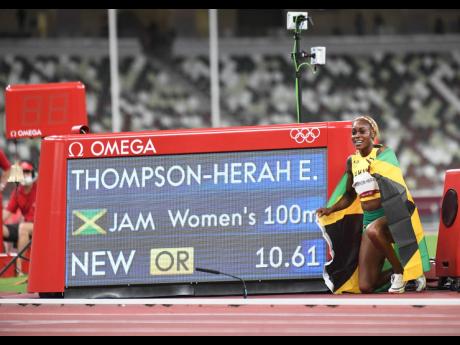 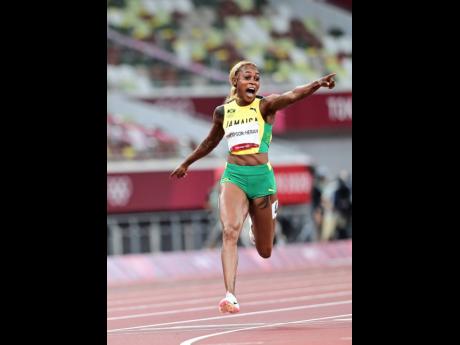 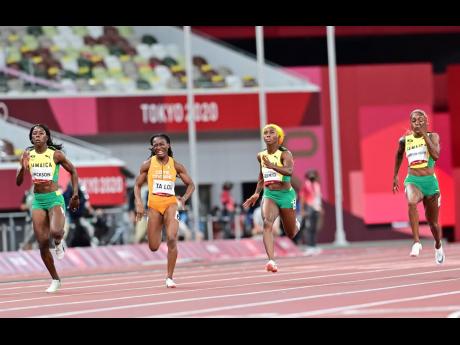 Gladstone Taylor/Multimedia Photo Editor
It was a 1-2-3 sweep for the Jamaican women in the 100m inside Tokyo Olympic Stadium yesterday. Elaine Thompson Herah defended her Olympic 100m title with a 10.61 seconds run; world champion Shelly-Ann Fraser-Pryce took the silver medal with a 10.74 seconds run and Shericka Jackson took bronze in 10.76 seconds.
1
2
3

The world yesterday witnessed one of the most amazing sporting performances in history, as Elaine Thompson Herah emphatically defended her Olympic 100m title with a 10.61 seconds run inside the Tokyo Olympic Stadium – in a run and a race that we might never see again in this generation.

Thompson Herah in the process erased Florence Griffith-Joyner’s 33-year Olympic record of 10.62 seconds, which was set in 1988, and led home another Jamaican sweep of the podium positions, with World champion Shelly-Ann Fraser-Pryce taking the silver medal with a 10.74 seconds run and quarter-miler-turned-short sprinter Shericka Jackson powering home in 10.76, for the bronze.

“Two months ago or probably a month and half ago, I didn’t think I would be here today but through it all, I held my composure, I believed in myself, I believe in God and I must say that the team around me is very strong, they give me tremendous support,” said Thompson Herah, who is now the holder of the second-fastest time in history, behind Florence Griffith-Joyner’s controversial 10.49 seconds world record.

Six of the eight finalists ran below 11 seconds but that could not stop the Jamaicans from against monopolising the podium, as they did in this same event at the Beijing 2008 Games and again in the men’s 200m at the London 2012 Olympics.

It was an emphatic return for Thompson Herah, who, since her history-making Olympic sprint double success at the 2016 Games in Rio de Janeiro, had to endure one bitter disappointment after the next, particularly injury setbacks and a medal drought that saw her leave the London 2017 and Doha 2019 World Championships without silverware.

“This is really special, it is super special and I have to share it with my brother Omar McLeod, who supports me a lot. My husband is like my brother as well, he has been in the sport before, he knows what it feels like, the struggle,” said Thompson Herah, who caught up to the fast-starting Fraser-Pryce midway the race and got up to 39 kilometres per hour in speed – faster than the speed limit in Bermuda – to power home, pointing at the clock as she crossed the line.

“I didn’t expect to run this fast even though I felt great during the rounds … Behind this 10.61, there was a lot of nerves but I said to myself ‘I said that you can do this, you have been here before, just execute’.”

She continued, “This 10.61 has taken a lot out of me. I knew I could have run this time like from 2016, but maybe I celebrated early too much (on those occasions) but I knew it would come one day.”

Interestingly, Thompson Herah’s time would have qualified her into the men’s 100m heats, from all except one of the men’s preliminary round heats.

WASN’T THE RACE I WANTED

Meanwhile, Fraser-Pryce, competing in her fourth and possibly last Olympic Games, was grateful for the silver medal, which takes her to seven, with only Allyson Felix and Merlene Ottey with nine and Veronica Campbell Brown with eight, possessing more medals than her at the Olympics.

“It definitely wasn’t the race I wanted in terms of the technical part of it,” said Fraser-Pryce who, at 34 years old, continues to defy the odds. “I never ever try to find excuses, as an athlete you just have to show up and perform regardless of what happened. I think I had a stumble on my third step and I was never able to recover but it is what it is.”

“I am happy that I was able to come out here and to represent and compete for the championships. It’s always a plus when you can compete with everything that you have and then you are able to walk away and whatever happens, you are grateful for the opportunity and you are able to move on to the next one.”

Jackson, who surprised many when she lined up in the 100m at the National Senior Championships last month, took the express route to Olympic 100m gold, becoming the ninth Jamaican woman to medal in the event after only 15 100m races since 2018.

“I think it was really amazing,” Jackson shared.

“I thought I was only going to run the 200m here and I actually ran the 100m, so for me it’s amazing. To step down from the 400m to the 200m and the 100m was a really good decision for me and when I see that I performed at my best and my best was good enough to be able to get a medal here in a 100m, it’s a wonderful feeling,” said Jackson.

Shanieka Ricketts, the World Championships triple jump silver medal winner, and Kimberly Williams will line up in the women’s triple jump final at 8:15 p.m. today (6:15 a.m. Jamaica time), while Oblique Seville and Yohan Blake will feature in the men’s 100m semi-finals, which start at 7:15 p.m. (5:15 a.m.).