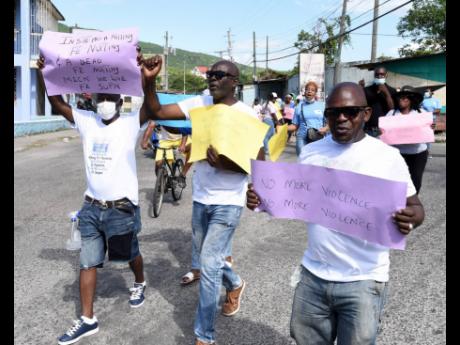 Ian Allen
Scores of residents from August Town in St Andrew turned out yesterday for an anti-violence march through several communities calling for peace and an end to gang warfare. 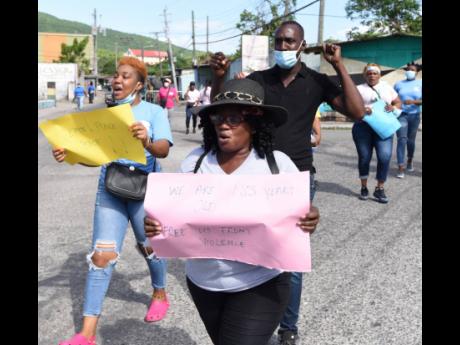 In a fervent display of will and determination, the Hermitage Women For Peace, in association with the Sizzla Youth Foundation and the August Town Peace Builders, staged a peace march on Sunday to register their opposition to the continued hostility in August Town and other adjoining communities.

The group marched from Hermitage and crossed over the Hope River into Bedward Gardens, where five men were killed recently by the security forces. The peacemakers then passed through African Gardens, Jungle 12, Marl Road, and Gold Smith Villa under the watchful eyes of members of the Jamaica Defence Force.

Chanting “August Town strong, together we are one,” the group, which started off with a small number, eventually got increased support as they walked through the various communities.

Some curious householders came out to their gates to give verbal acknowledgement, and onlookers at corner shops and bystanders hailed the move as marchers stopped to offer prayers in all the communities.

“We want lasting peace. We want this thing to go on. It must be done more often until the message is clear to the man dem who a kill off one another and innocent people,” a resident of Bedward Gardens, who identified himself as Noel, told The Gleaner.

He said that the efforts of the peace marchers were commendable.

Another Bedward Gardens resident, who identified himself as Rasta, said, “This is a good look; it is a start,” referring to the march. In the same breath, he noted that the men who were behind the vicious crimes were hard to “tame”.

The march was originally scheduled for Sunday, July 4, but had to be postponed because of a flare-up of violence in Hermitage that resulted in two deaths over one weekend.

Vice-President of the Women For Peace Organisation Sophia Burris, who organised the march, said she was pleased with the response from the communities. Burris told The Gleaner that it felt great for the residents to walk through communities they had not gone through in a long time out of fear.

“It was significant that we rescheduled this march for today, Emancipation Day, because we have to emancipate the warring communities from the slavery of violence,” she stated.

“It is important for persons to understand that not because we are living in communities with people who tend to make the place volatile, we still can get up and stand up for our rights.”

Kenneth Wilson, a social worker, said that he joined the marchers in order to effect change in the communities, pointing out that August Town, historically, should be a free community from violence.

“One-hundred and eighty-three years ago, August Town derived its name on August first, being one of the first free villages in Jamaica. It must be free now from the slavery of crime and violence that are keeping the community in subjection and creating fear,” Wilson said.

For many years, August Town has been plagued by violence, with scores of people losing their lives. In 2016, no violent deaths were recorded in the community.

Sunday’s peace march was ruled as the start of a sustained effort to transform the communities to a peaceful space.