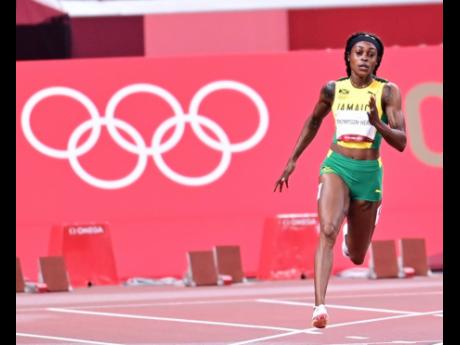 Gladstone Taylor/Multimedia Photo Editor
Elaine Thompson-Herah competing in the 200m semi-finals at the Tokyo 2020 Olympic Games on Monday. She could become the first woman to claim consecutive double sprint titles in Olympic history. 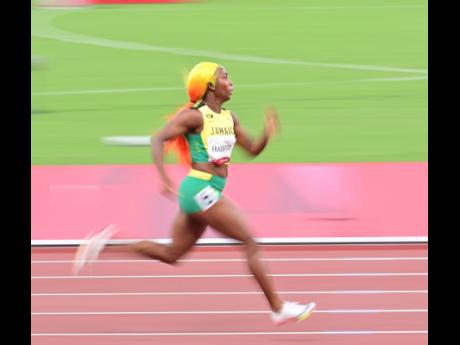 Jamaica’s Elaine Thompson Herah is on the brink of laying the crucial block of a historic legacy with victory in today’s 200m Olympic final as compatriot Shelly-Ann Fraser-Pryce launches an assault for her first gold medal at these Games.

Natoya Goule could also cap a superb athletics carnival by snatching an Olympic middle-distance medal – the first ever for a Jamaican woman and the first of any countryman in almost 70 years since Arthur Wint’s silver heroics in Helsinki.

Thompson Herah is flying at the Tokyo 2020 Olympics, and it would take a brave bet to go against the two-time Olympic 100m champion doubling down and becoming the first woman to win back-to-back sprint doubles at the Olympic Games, with the 200m final set to face the starter at 9:50 p.m. (7:50 a.m. Jamaica time) today.

An effortless personal best-equalling 21.66-second victory in the semi-finals heralded the frightening form that the 29-year-old is currently enjoying, with the winning time itself a big surprise for Thompson Herah.

“That was awesome,” said Thompson Herah with a swagger that has not always been evident throughout her career.

“Honestly, I didn’t think I was going that fast. That run was very comfortable. I tried to shut it down, but I guess the speed got the best of me.”

Only one woman has won 200m gold in consecutive Olympic Games, Barbel Wockel, who topped the podium for East Germany in the 1976 and 1980 Games.

Race spoke for itself

A win for Thompson Herah in tonight’s final will certainly put her in the conversation for greatest Olympic female sprinter of all time.

“That race spoke for itself and tomorrow (today), I’ll just come out fully prepared and confident, just as I was in this one,” she said.

“It would mean a lot to me, and hopefully a win will put me in a position for the next few years to come,” Thompson Herah said.

Her coach, Stephen Francis, is also looking forward to her performance in the half-lap event.

“Let’s say that my expectations are the same as they were for the 100m. She’s in good shape,” said Francis.

“... I know that at this point she is healthy, significantly better than she was a month ago, so I think there will be significantly improved performances.”

Meanwhile, Fraser-Pryce will be looking to win her first Olympic gold medal in the 200m event after claiming silver at the 2012 Games in London. She will start from lane four.

Goule has been impressive throughout the championship, winning both her 800m heat and semi-final comfortably under two minutes, en route to her first Olympic final.

The 2019 World Championships finalist has been in fine fettle all season and is primed to become the first Jamaican woman to win an Olympic medal in the 800m. Goule is optimistic about taking her shot at history at 9:25 p.m. (7:25 a.m. Jamaica time).

“To tell the truth, I had to take a minute to take it in. I am in my first Olympic final in my first Olympics and I was so emotional and so happy because anything can happen in the final. It’s just one more job left and I am really excited,” Goule told The Gleaner.

The only other Jamaican to compete in the women’s 800m final at the Olympic Games was Kenia Sinclair, who finished sixth in Beijing in 2008.