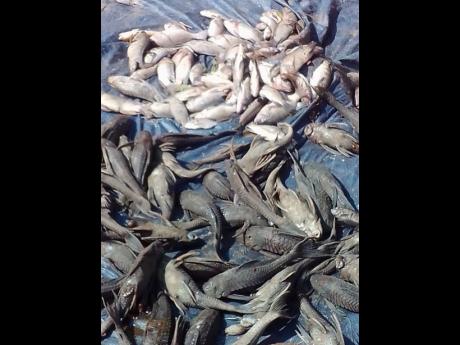 Photo by Almando Smith
Some of the dead fish found in the Rio Cobre. The National Environment and Planning Agency revealed that Windalco will be charged for reportedly releasing effluent into the river.

West Indies Alumina Company (Windalco) is to be charged for breaches under the Wild Life Protection Act after an investigation by the National Environment and Planning Agency (NEPA) found that the bauxite company is responsible for Monday’s fish kill in the Rio Cobre.

Residents in Kent Village in St Catherine’s Bog Walk Gorge awoke to numerous dead fish and a white frothy substance floating on atop the water.

An investigation launched by NEPA, which collected samples of the dead fish and the water, found that the cause of the fish kill was effluent reportedly released by Windalco.

Citing high levels of alkalinity in the discharge, Anthony McKenzie, director of environmental management at NEPA, disclosed that an enforcement notice is being prepared.

The mining company is expected to take amelioration measures, including a clean-up of the river.

Windalco was similarly charged in 2019 in relation to another fish kill. That matter, which is at case management at the St Catherine Parish Court, is to return for deliberation in October.

NEPA intends to sue Windalco for environmental damage but is awaiting the outcome of that matter, McKenzie said.

Meanwhile, disgruntled residents of Kent Village who say they are tired of the recurrent pollution of the river mounted a protest in the community on Tuesday, calling for justice.

Among their demands are for the river to be cleaned immediately and for the dead fish to be removed before the stench becomes unbearable.

Daniel Gayle, a fisherman who spoke with The Gleaner on Monday, complained that the fish kill has severely affected his livelihood and that of his colleagues.

“Right now this ago take up to a month and odd to clear up back and come back to normal, and right now all of the fish dem dead, so dem haffi go come throw back fish in a di river so that we can get fish to eat,” Gayle told The Gleaner.

“It’s the river we live off on a daily basis, we don’t have another choice, so we unemployed right now, so we need someone to come and do something for us right now,” he added.

NEPA has advised residents not to use any water from the river or to consume any of its fish until clearance is given.