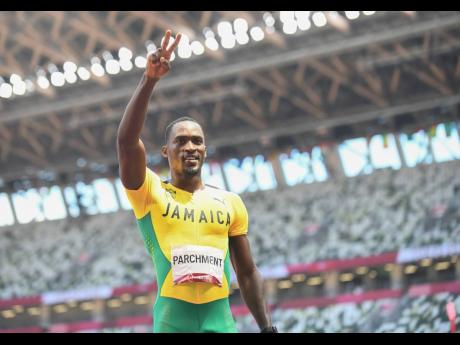 In every career, there comes an accomplishment that makes one complete.

For coach Fitz Coleman, that defining moment glistened on an Olympic gold medal-winning performance, delivered by Hansle Parchment in the men’s 110m final at the Tokyo 2020 Games in Japan on Thursday.

The Jamaican, who has been involved in coaching for 45 years, admitted only recently having a conversation regarding career fulfilment. Now Parchment’s golden delivery has brought fruition.

“Without a doubt, I will honestly say this is not about me. It’s about the athletes.”

Try as he may, even the unassuming 68-year-old coach finds it difficult to hold back on a crowning achievement.

“About three months ago, I was talking to a friend, and I said I feel as if I haven’t accomplished much in the sport, and the reason is that a gold medal continues to be elusive,” Coleman told The Gleaner.

His athletes have won bronze at the Olympics, silver at the World Championships, and even Usain Bolt registered the World Junior record under his tutelage, plus many others. Never before Thursday had Coleman got that golden feeling.

Coleman coaches five athletes, three of whom competed at ‘Trials’. One crashed out.

‘’To have only two persons, and they have made their respective finals, is a major accomplishment,” said Coleman, who represented Calabar High in Manning Cup football, Sunlight Cup cricket, and track and field.

The Olympic preparation of Parchment in the latter – which included sports studies in Germany with a major in track and field, plus sports science, exercise and a bit of psychology – called upon every bit of his knowledge and experience after injury derailed what up to February, was a “good” build-up for Parchment.

Having set off their Tokyo preparation from September, Coleman said Parchment, the 2012 Olympic bronze medallist, developed a stress fracture that kept him off the track and limited training to the gym and the pool.

“Because of the buoyancy of the water, it took the pressure off the foot,” Coleman explained, forcing him “to tweak the programme” in readying the athlete for Trials.

“We managed to handle things and handle it well enough, and it culminated in this,” he remarked of the gold medal.

While Parchment qualified by placing in the top three, there were suggestions after the National Senior Championships that one among the trio be relieved of their spot in favour of defending Olympic champion Omar McLeod, who clattered the hurdles and placed last.

Two of the three qualifiers won an Olympic medal in the final as Ronald Levy took bronze.

“First and foremost, in the eyes of the public, they may see it as vindication,” Coleman said.

“But he (Parchment) earned that spot. He competed for it. It wasn’t given to him. So for persons to be saying ‘he should give it up’, that’s not what it is.”