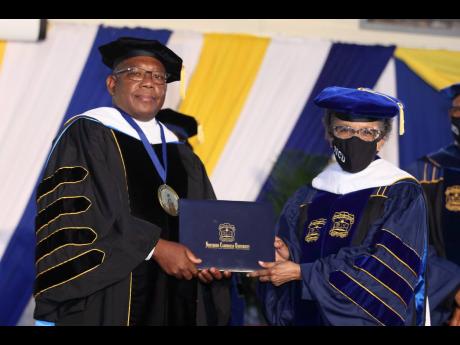 At its 98th commencement and graduation ceremony yesterday, where over 500 students were presented with degrees, the Northern Caribbean University (NCU) conferred an Honorary Doctor of Liberal Arts Degree on veteran broadcaster Fae Ellington.

Ellington, who was also the second commencement speaker for the day, challenged the graduates to continue on the trend of excellence for which the university is known.

“I readily confess to being deeply impressed by the extent to which brilliant careers were incubated in this university, and I have noted with interest the contributions graduates have made in diverse spheres of national and international life,” she said.

Making note of the university’s international successes in information technology and music, among other areas, as well as her own successes throughout her decorated career in theatre, media, and education, which spans several decades, Ellington highlighted the importance of overcoming fear and seizing opportunities when they present themselves.

“Achieving excellence is not for the quitter or the faint of heart. Some of the greatest achievements in the history of the world were produced by people who failed time and again or by people who had setbacks,” she said.

“Throughout history, anyone who achieved success in their chosen path had to overcome obstacles. These people went through the grinder and came out better than before. Their stories stress one of the most important lessons of all and that is never ever give up.”

In the first commencement ceremony, president and chief executive officer of the National Association of Black Hotel Owners, Operators and Developers Inc, Andrew Ingraham was conferred with an Honorary Doctor of Business.