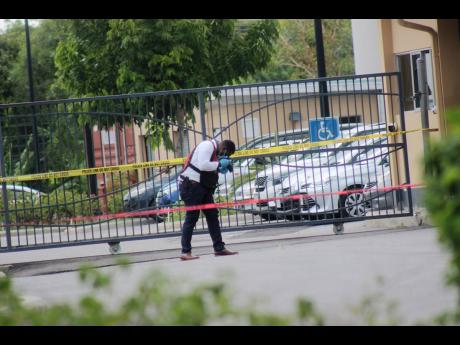 St James yesterday passed the grim mark of 100 homicides since the start of the year, when a man said to be a top-tier member of the notorious Granville-based ‘Big Yard’ Gang was shot and killed gangland-style in the parking lot of a business process outsourcing (BPO) firm in Montego Bay.

The dead man, who has been on the St James police’s radar for quite some time, has been identified as Oryon ‘Chef’ Williams, who is said to be a former student of Cornwall College.

“No angel died out there today,” commented a police investigator after he realised that the deceased man was Williams. “This man has been giving a lot of trouble for a long time, and while I don’t want to sound callous, he got what he was looking for based on the way he was living his life.”

According to reports, about 2 p.m., a car drove into the parking lot at Vista Print location on the outskirts of Montego Bay and Williams alighted.

As the car drove off, another car pulled up alongside him and several men armed with handguns exited. Williams tried to run but was cut down in a hail of bullets.

“It was like a movie … . As one car drove off, the other one pull up,” said an eyewitness. “He never had a chance … . They were all over him before you could say, ‘Who that?’”

The killing of Williams is the latest in a string of murders linked to Granville among rival gangsters locked in a turf war tied to the illicit lottery scam. In the 12 murders arising from the feud, two of them were double murders involving children and adults.

Michael Troupe, councillor for the Granville Division, who recently spearheaded a peace march through the community, has made several appeals to National Security Minister Dr Horace Chang to establish a zone of special operations in the community, but to no avail.

When The Gleaner spoke to Troupe last month, he said he was becoming increasingly overwhelmed by the situation as, at the time, the community had recorded 11 murders in just three months.

“When you reach a stage where we are killing babies, it bad. Real bad. And as we speak today, I am coming from the burial of one, and there are 10 more bodies left to be buried from the recent spate of shooting in Granville,” Troupe told The Gleaner at the time.

And, arising from a recent shooting incident in the community, a man identified as 29-year-old Dwayne Maxwell was earlier this week charged by the St James police for the double murder of Shelly-Ann Shaw and her four-year-old son, who were shot and killed at their home on July 19 by gangsters who invaded their home.