Deportation fight not over 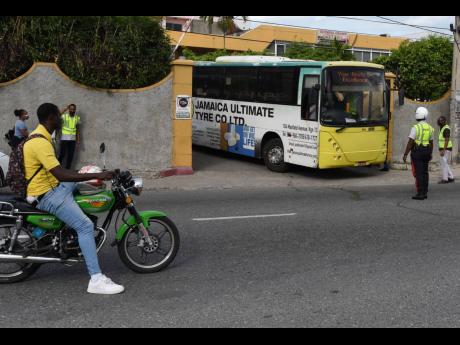 Ian Allen/Photographer
The seven deportees from the United Kingdom arriving at the Olympia Crown Hotel in St Andrew early Wednesday morning to begin a period of quarantine.

Now that last-ditch efforts gained a temporary reprieve on Wednesday, United Kingdom (UK)-based human rights groups and activists say the hard work now begins to continue the fight to halt further deportation flights and bring awareness to the campaign against “a summer mass deportation” to the island.

On Wednesday, seven Jamaicans were deported on board a chartered flight from the United Kingdom, a massive cut from between 50 and 90 persons initially earmarked for the trip due to intensive campaigns against their forced removal.

Frantic legal challenges launched and reports indicate that many of the Jamaican nationals had their tickets cancelled at the last minute after legal appeals and some obtained temporary court injunctions.

The UK Home Office has insisted that those set for removal are convicted criminals who have received sentences of more than 12 months and those who have no right to be in the country but refuse to leave voluntarily.

Campaigners, however, have protested that it is unreasonable to remove people who have spent a lifetime in the UK to a country where they have no ties.

She said in a tweet on Wednesday: “No country should accept charter flights. They sweep everyone up and create a political spectacle that dehumanises those involved along with their children and loved ones.

“Charter flights to black Commonwealth countries that were previously enslaved by Britain, like Jamaica, Ghana, Nigeria, are abhorrent chains. Black families are ripped apart by these actions. Transatlantic crossings, in the dead of night, is sickening and the data now confirms that these countries are disproportionately targeted.”

Karen Doyle of Movement for Justice believes the Home Office will try to keep the remaining Jamaican nationals inside Colnbrook in an attempt to deport them again.

She said: “The Jamaica chartered flight is unique because of the Windrush scandal. The government thought the only way this could work was if they made sure everyone had criminal offences.

“A number of the people have been out [of prison] for five, six or seven years and have not reoffended. Some were groomed into criminal activity in childhood. A number of people grew up in care and social services should have had the responsibility to make them British citizens.

“The government like to put out the headline about ‘crimes’, but the truth is way more complex, these are all people from working-class families, a lot of them have partners who are key workers, cleaners, carers or nurses.”

BARAC UK is now planning strategy meetings with other human rights groups to create a greater awareness on the campaign against the Home Office plans to go ahead with other flights.

Zita Holboure said: “BARAC UK together with our sister group Black and Asian Lawyers for Justice have organised a strategy meeting with various groups campaigning against detention and deportations to further strengthen our collective work and campaign against racist immigration policies that lead to mass deportation flights, as well as discussing our plans in relation to the other such flights this year.

“We are also working with some groups on a campaign relating to TUI Airways, which is responsible for the majority of deportation flights. Our work also continues for justice and compensation for the Windrush generation.”

It is reported that Wednesday’s chartered aircraft costed the government approximately £300,000 (J$64 million) for the flight to Jamaica and back.

The National Windrush Organisation based in Birmingham had confirmed it had made representation for 12 persons who were set to be deported, some of whom came to the UK when they were children and, therefore, would fall under consideration as being connected to the Windrush generation.

Other human rights and immigration rights campaign groups like Movement for Justice and BARAC UK had also come out strongly against the Home Office’s efforts to deport persons on the flight that have been in the UK since they were children.

Zita Holbourne, co-founder of BARAC UK, said: “The Home Office say they are targeting foreign national criminals, but in reality, some might have come to the UK as children and spent most of their life here than they did in the Caribbean, which they don’t know any more. They are a product of British society and the criminal justice system disproportionality impacts these people because it is institutionally racist.”

Movement for Justice founder Karen Doyle also said it is wrong to try to deport people who have spent their childhood in the UK.

She said: “There is very little support for deporting people who were raised in our schools and in our care systems to countries they don’t even remember.”

Another issue of concern for campaigners was the reported outbreak of COVID-19 at the Colnbrook Detention Centre near Heathrow Airport, where many of the persons slated for removal were being housed.

Holbourne described this development as disturbing as it posed a risk to persons being deported, and also to Jamaica.

“There should be collective and individual risk assessments and equality impact assessment conducted, given the pandemic. To fly someone who is ill and could get into difficulty in the air with no access to hospital or medical professionals is a breach of human rights.”

The Jamaican Government apparently made efforts on Tuesday to ask the British authorities to halt the flight over the COVID-19 concerns, but the Home Office gave assurances that everyone that was due to fly had had a negative PCR test.