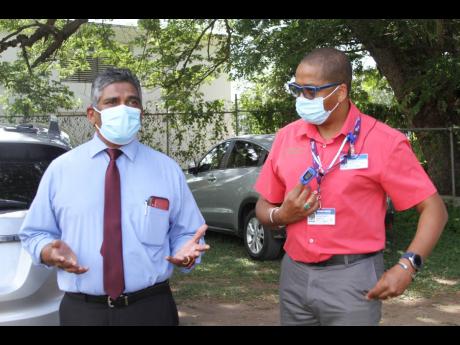 WESTERN BUREAU:
As the island witnesses a third COVID-19 wave, a group of medical practitioners are lobbying for the implementation of early home-based treatment to minimise hospitalisations and death in the country.

The doctors, who staged a press conference on Wednesday, made an urgent appeal as several major hospitals across the island face patient overflow and lack of bed space for new cases.

Three hundred and fifty Jamaicans were hospitalised up to Wednesday, and the number of positive cases is increasing considerably on a daily basis, with Kingston and St Andrew, St Catherine, and St Ann accounting for the lion’s share.

The crisis has caused the University Hospital of the West Indies (UHWI) to reduced elective and non-emergency procedures by 50 per cent, it advised on Thursday as it urged Jamaicans to get vaccinated.

According to UHWI data, 96.1 per cent of its patients were unvaccinated, while the remaining 3.9 per cent had received only one shot of the two-dose AstraZeneca vaccine.

Speaking at Wednesday’s briefing, neurosurgeon Dr Roger Hunter expressed concern that important equipment such as the pulse oximeter, used by some Jamaicans in homes to measure oxygen levels for early intervention, attract too much duty coming into the country.

The doctors want a private-public sector partnership with the Government as the numbers rise and their colleagues working in the hospitals and clinics become overwhelmed. Ready to assist where possible, they say that the streamlining of testing to include private practitioners of public patients in early treatment would significantly reduce the flood in the system.

They say there is no protocol at this time to ensure that this happens and are offering their expertise and facilities as options for people who need care but are adhering to the ‘Tan You Yard’ advice, particularly, with symptoms of COVID-19.

“As soon as there is an onset of the virus, we are advising persons affected to find their doctors and start treatment within the six days,” argued senior family and occupational physician Dr Leroy Hayman.

“We need to start you on treatment. We monitor you from home. The good news is that the outcome is very, very favourable,” he added, noting that early intervention can reduce hospitalisations.

“Early treatment works. I have treated many patients with Ivermectin, xithromax, xarelto blood thinners, and with steaming, and they have all lived,” stressed Hunter.

The group is appealing for General Consumption Tax exemption on oximeters, personal protective equipment, and certain life-saving drugs so that patients can access them at better rates.

They shared concerns for their colleagues in the public health system, lauding the many practitioners, front-line workers, medical internists, who they tagged as highly trained professionals who have been so carefully monitoring the patients at the hospitals.