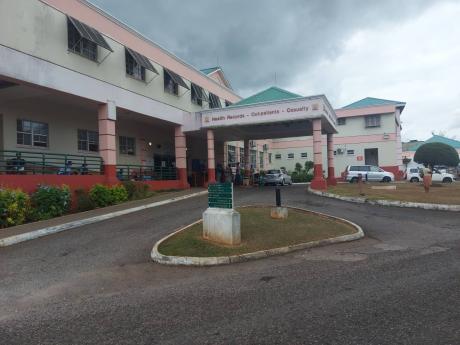 File
Mandeville Hospital is buckling under a wave of coronavirus cases.

MANDEVILLE, Manchester: Healthcare workers at the Mandeville Regional Hospital are struggling to decide which patients are administered oxygen support and which ones have to wait – a crisis exacerbated in the last week as coronavirus infections and...

Healthcare workers at the Mandeville Regional Hospital are struggling to decide which patients are administered oxygen support and which ones have to wait – a crisis exacerbated in the last week as coronavirus infections and complications spread like wildfire.

Chief Executive Officer Alwyn Miller said on Sunday that the hospital only had approximately 200 units of liquid oxygen, with hopes that the stock would be replenished by end of day into Monday.

“It’s lower than it normally would be, and because of that, the medical team has to be managing those patients in a manner that those who must be on oxygen will continue to get it, but at a lower rate,” Miller told The Gleaner.

He said the 200 units could last the hospital for a day under normal circumstances but the compelling demand fuelled by a stifling number of COVID-19 cases threatened healthcare deliverables.

“We have scaled down, and we are trying to see how best it can last us until we get the supply. The team is now giving as per need and trying to find other measures that they can take to ensure their patients are served,” said Miller.

The Ministry of Health said that hospital officials have been instructed to conserve oxygen supplies as they await distribution from suppliers Industrial Gases Ltd Monday into Tuesday. But the Government got assurances from IGL that it was bolstering inventory, with imports expected today.

“Bulk medical oxygen storage at the National Chest Hospital is being expanded by 100 per cent while a liquid oxygen tank will be installed at the Falmouth Hospital later this week to provide storage for up to three weeks’ usage at that facility.

“Further, bulk storage is shortly to be commissioned for Annotto Bay Hospital while Savanna-la-Mar Hospital received three weeks’ storage of liquid oxygen today, and Percy Junor will be upgraded to accommodate two weeks’ storage in a few days,” the ministry said.

Several public hospitals have been provided with liquid oxygen for between seven and 14 days of usage, the ministry said.

As local hospitals continue to buckle under pressure, COVID-19 patients and their relatives are even more worried than health officials about the shortage.

A man who lost his relative on Friday to SARS-CoV2 said that his wish was to avoid contracting the highly contagious virus and being hospitalised as conditions worsen.

“My brother went into the hospital about four days ago and he was on oxygen, and to how things are going, mi know him probably couldn’t get as much as he was supposed to ... because so many other persons there need it,” the relative said.

“People haffi either dead or get better for the oxygen to free up.”

The man, who requested anonymity, said that his brother died after four days of hospitalisation.

“I don’t think the hospitals really can manage to care the patients how they are supposed to with the limited resources,” the relative said.

More than 90 per cent of COVID-19-positive persons hospitalised have not been vaccinated.

The coronavirus vaccine does not prevent infection or transmission of the virus but significantly limits the risk of severe illness or risk.

Describing work at the facility as a nightmare, a nurse at the hospital who requested anonymity said this was the worst period of her time there.

“People out there do not know the truth. Unless you visit the facility and work on the wards and see the situation for yourself, you don’t know what is happening. Persons have to die so another person can get a bed.

“Oxygen is short, and something that could be shared easily, staff have to be playing ‘eenie, meenie, minee, mo’ to see who is worst and needs it most,” the nurse said.

The nurse stated that even colleagues who were once privileged to choose ward assignments have to be prepared to work anywhere as the numbers climb.

“I get up some mornings and I question if I should go to work. I am so tired and I don’t know if it is worth it,” the nurse said.

“I am exposing myself daily and also exposing my family, and to think that some of these persons you are treating failed to adhere to the protocols is infuriating,” she said.

“Imagine that in trying to help a COVID delinquent, I can get sick, possibly hospitalised, and that person gets oxygen before me because his condition is worse even though we both need it ... . That is the reality,” the nurse added.

That concern is in line with the narrative of unease and strife that stoked a militant sickout across Jamaica’s hospitals last week, with a third of nurses reporting sick or absent for two days.

The action was evidence of blanket defiance to the authority and leadership of the Nurses Association of Jamaica, headed by Patsy Edwards Henry, whose executive’s advocacy has been viewed as weak.

Prime Minister Andrew Holness’ comment at a Jamaica House press briefing – insisting that no group would receive priority treatment beyond standard triaging, or assessment – also inflamed tensions among sickout plotters, some of whom were numbered among the 1,000 nurses involved in an online chat on Telegram, an encrypted messaging app.

On Saturday, the island recorded 929 new infections – a 24-hour record.

Of that number, Manchester recorded the second-highest number of infections, 123, behind Kingston and St Andrew with 132.

Last week was a period of ignominy in Jamaica’s COVID-19 management, with new records in the reporting of deaths and hospitalisations, with the positivity rate at a high of 50.7 per cent. The grim equation: One in two Jamaicans might have COVID-19.