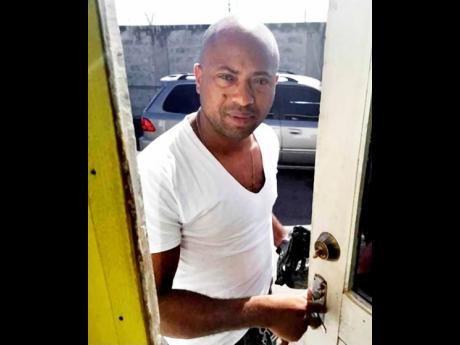 News of the passing of the well-known Constable Damion Knight from complications associated with COVID-19 has shattered the mood among colleagues at the police post at the Sangster International Airport, as some did not even realise he was ill.

Knight, who was attached to the Ports Division of the Jamaica Constabulary Force (JCF) in Montego Bay, St James, had previously worked at several police stations across St James and was considered as an officer with a bright future in the JCF.

According to reports, over recent weeks, he had been complaining of not feeling well and when his condition began to worsen, he was taken to the Falmouth Hospital, where he was tested and it was discovered that he was positive for the coronavirus. He was promptly hospitalised.

Efforts to get a comment from the policeman’s family were unsuccessful yesterday as his wife, who was reportedly of the view that he was getting better, was too distraught to speak to the media.

“He was a complete family man and he was in the prime of his life, so the wife is beside herself with grief,” a policewoman close to the family told The Gleaner.

Knight’s colleagues recall him being a “committed police officer, who really loved his job”.

“We are all shaken up by this news ... . We knew he was in the hospital, but this was not the news we had expected,” one commented.

“He comes from a police background. His father is a former senior superintendent of police in this very same Area One division,” another officer told our news team. “The entire Area One Division is saddened by his passing and our heart goes out to his wife and his two children.

“I am sure that his death will reverberate across the entire division ... . This COVID-19 thing is as deadly as any gunman we are likely to encounter out there because it is a global killer who is not running away but seeking to claim more lives,” the cop added.

When contacted, Corporal Rohan James, chairman of the Jamaica Police Federation, expressed condolences to Knight’s family, friends, and co-workers, adding that the tragic passing will provide extra impetus in the cops’ push for greater protection, including ensuring the availability of medication whenever the need arises.

James said that at the last count, some 47 members of the force were either in quarantine or in isolation due to their exposure to the virus or contact with affected persons, but the police remain “totally committed to protecting Jamaica against the criminals that are out there seeking to undermine the nation’s security”.

A number of prominent personalities in western Jamaica have died in the third wave of the pandemic, including nurse Diagrea Cunningham, who supervised the Accident and Emergency Department at the Savanna-la-Mar Hospital, and prominent Montego Bay-based educator Jeannette Solomon, a former acting principal at St James High School.