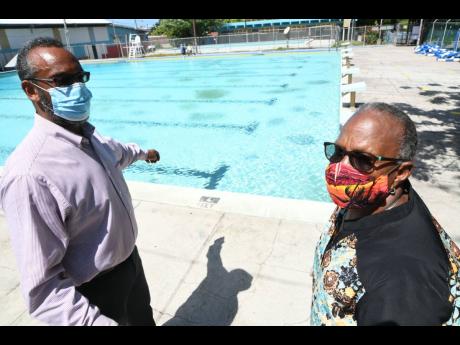 File
Sarah Newland Martin, administrator and general secretary of the YMCA, is seen here with Allan Marsh, chairman, beside a swimming pool on the Y’s Hope Road compound in this July 20, 2020, photograph.

The Kingston Young Men’s Christian Association (YMCA) is appealing for financial assistance to alleviate a “crisis situation as its revenue has dried up owing to the COVID-19 pandemic.

The YMCA is acclaimed for transforming the lives of thousands of young men since 1920.

It has also been the training ground for lifeguards seeking employment locally and overseas and provides internship opportunities for people pursuing studies in social work.

Administrator and General Secretary Sarah Newland Martin told The Gleaner that the pandemic has not allowed the association to continue the majority of its programmes.

Some 120 young men are enrolled in its youth-development programme, which has been moved online, but attendance is inconsistent because of a lack of access to devices and the Internet.

Newland Martin said that a student who spent one year at YMCA will be graduating from The University of the West Indies in November with an undergraduate degree in molecular biology and he hopes to travel to France to teach.

“We can’t lock down after 101 years. It’s just not tenable, and we have to continue or work with our youngsters. We have to save them,” said Newland Martin.

YMCA’s 100th anniversary committee was formed in 2019 to prepare for the significant milestone in June 2020.

The committee’s goal was to highlight the work of the YMCA, raise funds to sustain its activities, and modernise and introduce new programmes.

He noted that financial assistance in two tranches from the sports ministry and the Sports Development Foundation have helped the YMCA to keep going.

Fennell said hat YMCA has requested further assistance, but it may not be forthcoming.

He earnestly asked Jamaicans and the private sector to make donations.

“As we see it now, the future is very dim because if we can’t keep the flame alive now, how are you going to reignite it? We are in desperate straits right now,” Fennell said.

The non-governmental organisation (NGO) is primarily funded by the revenue from aquatic programmes and membership dues while additional funding comes from corporate donors.

For two consecutive years, the YMCA has not held a summer camp, which is one of its major income earners.

“We really are at rock bottom,” said Newland Martin.

Help YMCA to keep its doors open by making a contribution.