Prosecutor makes case for One Don as brutal gang 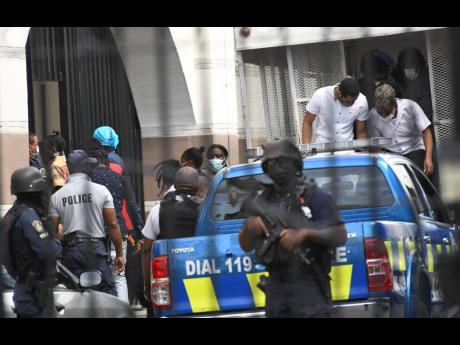 Rudolph Brown/Photographer
Some of the alleged 33 members of the One Don-Clansman Gang alight from a truck before entering the Home Circuit Court in downtown Kingston on Monday.

The One Don Gang, a faction of the feared St Catherine-based Clansman Gang, was painted on Monday as a well-organised and ruthless criminal enterprise that carried out a slew of murders and arson attacks across the parish.

Prosecutors pressed home the strength of those claims on Day One of the trial of 33 defendants in largest and most high-profile gang case in Jamaica, targeting the reputed leader Andre ‘Blackman’ Bryan started in the Home Circuit Court.

A prosecutor for the Crown, in its opening statement, charged that the 33 collectively engaged in serious criminal activities that were planned and executed under Bryan’s “absolute” command.

“The double murder in the New Nursery community of Spanish Town in September of 2017, where two people were shot and killed whilst in their home and then set ablaze, burnt beyond recognition, is demonstrative of the gruesome manner in which this gang operated,” the prosecutor said.

The Crown, the prosecutor pointed out, is alleging that the defendants are part of the One Don Gang, which is also based in St Catherine and which carried out a range of murders, conspiracies to murder, extortion, and arson throughout the parish between January 1, 2015, and June 30, 2019.

“It is the position of the Crown that the Clansman-One Don Gang fits the legal definition of a criminal organisation in that it has a clear structural hierarchy and a common purpose with Andre Bryan as the head, Kevaughn Green, the second in command, and sub-leaders such as Daniel McKenzie,” the prosecutor declared.

The gang, the prosecutor further said, operated from its headquarters in Jones Avenue, Spanish Town, where it had meetings, planned illegal activities, and hosted briefings and debriefings after each illegal mission.

All 33 had various roles and responsibilities, including killers or shooters, bankers, drivers, lookout men or watchmen, gunsmiths, armourers, and foot soldiers, the prosecutor told the court.

According to the prosecutor, the lone female defendant, Cole Christie, had the “esteemed” role of being the gang’s liaison officer for incarcerated members and those on the outside.

She was also responsible, it is alleged, for securing lawyers for gang members and served as a link with unscrupulous cops.

Defendants such as Johnson, James, Whitely, Elliston, Richards, Taylor and Morris, who reportedly acted as the foot soldiers, were charged as being responsible for ensuring that the murders ordered by Bryan were executed as planned and for collecting extortion funds, the prosecutor said also.

Another defendant, Salmon, was described by the prosecutor as a chemist who was the gang’s firearm specialist dealer, who secured guns for purchase and also fixed or modified weapons.

Forty-two witnesses, including two self-confessed members of the gang, will give evidence at the trial, which will be supported by ballistic, digital forensic, and biological evidence.

The two starting witnesses, who have opted to use pseudo names, will testify via video link from a remote location.

According to the prosecutor, one of four in the trial, both witnesses will give similar accounts of criminal activities that they observed the gang undertaking between 2017 and 2019.

One of the self-confessed gang members is expected to start giving evidence today when the trial resumes before Chief Justice Bryan Sykes.

The One Don Gang was reportedly established following a split of Clansman amid an internal power struggle between reputed leader of the Clansman, Tesha Miller, and Bryan, who allegedly was the top lieutenant of Miller.

Control of the lucrative extortion racket, which reportedly rakes in $1.5 million daily, was said by the police to have been at the heart of the conflict.

Miller is currently serving a near 39-year prison sentence following his conviction last January on charges of accessory before and after the fact of murder, in relation to the 2008 killing of Douglas Chambers, then chairman of the state-owned Jamaica Urban Transit Company.