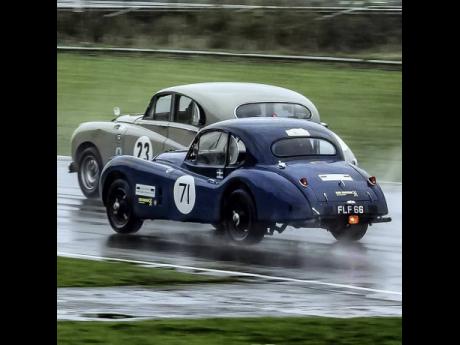 Contributed
The restored 1955 Jaguar XK 140 (in forefront) battling with a Jaguar MK7 in very wet conditions at Castle Combe in 2018. 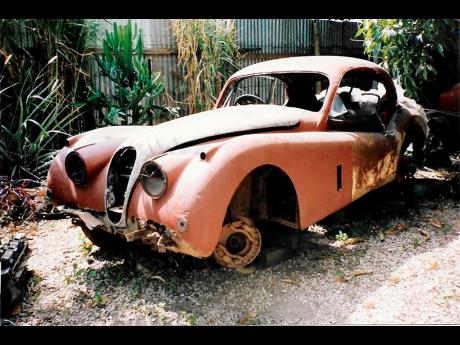 Contributed
The banged-up Jaguar XK 140 seen here in Jamaica in 1988. It was restored in the United Kingdom in 2006. 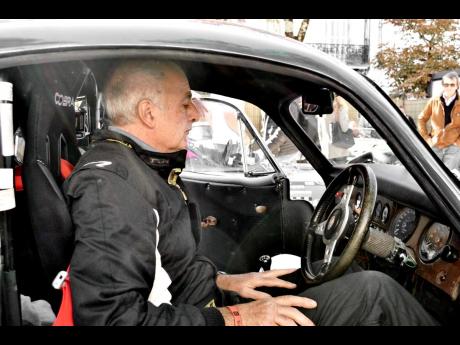 Contributed
David Churchill left Jamaica in 1988 with a piece of history from the 1961 Grand Prix at Vernam Field.
1
2
3

Sixty years to the day when a 1955 Jaguar XK140 sputtered and failed to finish in the 1961 Jamaica Grand Prix, the restored diamond in the rough is still racing in England today. David Churchill’s 33-year romance started with love at first sight...

Sixty years to the day when a 1955 Jaguar XK140 sputtered and failed to finish in the 1961 Jamaica Grand Prix, the restored diamond in the rough is still racing in England today.

David Churchill's 33-year romance started with love at first sight when he stumbled on the banged-up beauty under a mango tree in the 1980s.

Churchill's own dream of racing was sparked by the purchase of the classic car.

“I've always wanted to race, but because I've been an expatriate for so many years, I didn't get the opportunity. I was determined to do it as soon as I moved back to Europe, and this car was literally the opportunity to build and race in historic events,” said an excited Churchill.

On September 24, 1961, the 55-mile Jamaica Grand Prix was held at Vernam Field in Clarendon.

The Daily Gleaner reported that the race, “a thriller from start to finish”, was won by Richard Sirgany with a time of 57 minutes and 6.6 seconds.

“Two other cars did not finish the race: Danny Ennevor's Jaguar XK140 and Percy Silvera's MG Special,” the article read.

Ennevor was among a group of Jamaicans who introduced motor racing to the island.

He was also co-founder of the Jamaica Air Taxi service and later, a prominent reggae music promoter.

Churchill, now 66, was on assignment in Jamaica during the period 1986 to 1988 as managing director of the Jamaican affiliate running the import supervision programme.

The programme was designed to control imports and stop underinvoicing and overinvoicing of products.

While here, he heard about an old Jaguar E-type that was languishing in the mountains, which piqued his curiosity.

“I have always been very keen on classic cars and I had an old Jaguar in the UK, and that was the original reason for following up this story about an abandoned old Jaguar,” he told The Gleaner.

He visited Stony Hill Hotel in St Andrew for a viewing, where he met the owner.

The car had passed through the hands of three more Jamaican owners before being acquired in the 1970s by the hotelier.

Churchill recalled that it had no wheels and was a complete wreck. He did not make the purchase as the owner's asking price was not reasonable, and he also had serious doubts about whether it was salvageable.

Two years later, Churchill came across the car just a few weeks before he left Jamaica outside an antique shop next to Devon House.

Its owner was now Steve Solomon, who had acquired the car, which by then had three wheels, in a deal.

“We reached an agreement, and I bought it,” Churchill recounted, adding that he left Jamaica just a week before Hurricane Gilbert struck in 1988.

It was first shipped to the United States, where he had his next assignment for two years.

“When the family moved to Latin America for the following assignment, I sent the car back to the United Kingdom, and there it stayed until I returned to the UK in the mid-1990s, and I began restoring the car in about 2006,” he said.

Restoration took five years, most of which he did on his own.

Churchill also had the assistance of friends and amateur mechanics.

In 2011, he began racing and has participated in two to three races annually.

He has been the sole driver of the 1955 Jaguar XK 140, which has a Motor Sport Association competition logbook.

“I started to do circuit racing with it in 2015, which is the ultimate type of motor sport. I have done less circuit racing than hill climbs and sprints because of the cost involved,” he explained.

“When you race, you're constantly spending money on them. Even as a race car, it is a very expensive hobby to keep the car competitive for the race track,” Churchill said.

For him, the car has meant “great fun”.

“The ultimate aim is to get fun out of it, which I do. The fact that it raced very early on in its life in Jamaica is an added bonus. It has a little Jamaican flag on the driver's door, and a lot of people are interested in it,” he said.

Churchill is father to three daughters, none of whom have an interest in motor racing.

“I'm 66 years old and I can't go on racing forever. I've only got a couple more years to be racing it, so at that point, I'll either sell it or I keep it and convert it to a road user-friendly vehicle,” he said, when asked about future plans for the car.

Efforts to contact Ennevor and Solomon, or their family, were unsuccessful.