Tapia: The US wronged Vaz 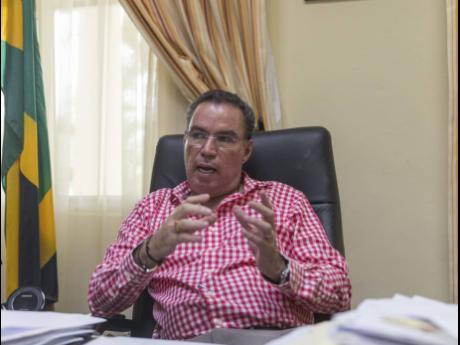 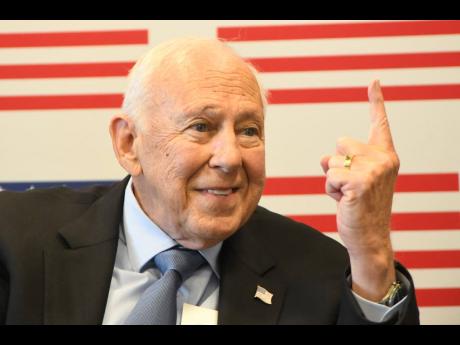 A former American ambassador to Jamaica says the note on the new one-year US visa issued last week to Cabinet Minister Daryl Vaz is an attempt by the United States to cover up its wrong against the politician. Donald Tapia was speaking to The...

A former American ambassador to Jamaica says the note on the new one-year US visa issued last week to Cabinet Minister Daryl Vaz is an attempt by the United States to cover up its wrong against the politician.

Under US immigration law, 212 (A) (2C) (1) speaks to controlled substance traffickers.

Vaz has denied any wrongdoing.

Tapia, whose stint here ended in January, said the granting of the visa was the US doing the right thing and that the notation was merely to avoid admitting to an error in its initial determination.

“Nobody wants to admit when they’re wrong. They’re government employees. You don’t want to make a mistake if you’re gonna get promoted … . If you made the wrong decision, you try to cover it up a little bit, you won’t admit it,” he said.

Tapia expects a removal of the annotation in the next five years and said Vaz is due to get a five-year diplomatic visa shortly.

Tapia explained that he played no role in the revocation decision and was only informed by embassy officials shortly after taking up his post in Kingston in August 2019, that action was looming against Vaz and Phillip Paulwell, a lawmaker from the Opposition People’s National Party (PNP).

Tapia said complaints against Paulwell and Vaz were made to the US while the Portia Simpson Miller-led PNP was in office.

According to the former ambassador, he reviewed Vaz’s case on the request of Prime Minister Andrew Holness, whom he said was considering Vaz, then a minister in the Office of the Prime Minister (OPM), for a very important ministry.

“I told the prime minister I will do this as long as you, prime minister, review all the records that you have in your establishment, under your criminal justice system…to make sure that we do not drop anything between the cracks that could affect the United States or affect Jamaica,” the former diplomat disclosed, adding that he got no request to undertake a similar process for Paulwell.

He said the results from US and Jamaican authorities cleared Vaz.

“I felt that under my watch as the ambassador of the US, that I had a duty to try to correct the wrong,” he said.

Vaz continued in OPM although his responsibilities changed in June 2020 following the Holywell land lease controversy.

Three months later and after a general election, Vaz was given his own ministry – science, energy and technology.

According to Tapia, this is “probably the number one ministry in the government” because of its intersection with telecommunications, national security and the economy.

US Immigration Attorney Wayne Golding Sr told The Sunday Gleaner that in granting the visa waiver, the US Embassy would have looked at Vaz’s background and anything that could have made him inadmissible to the US.

The lawyer said whenever a waiver such as this is granted, the positives outweigh the negatives and that the individual benefiting could have been flagged by consular officers because of a relative.

Vaz, who travels to the US shortly on official business, initially declined to speak on the visa notation but on Saturday tweeted: “The accusation was made and that cannot be changed. It was investigated and found baseless.”

Some of Vaz’s Jamaica Labour Party colleagues have questioned how a picture of the visa with the notation became public.

“It was a stupid thing to do,” said a senior official of the Holness administration.

“It will raise questions that will not go away easily. A minister with a visa citing a law dealing with trafficking? That should not have been made public.”

Meanwhile, Vaz said he was keeping his promise to give updates on his visa situation.

“I issued a statement at the time of revocation and committed as a public official to keep the country informed on the matter, which I have done in my usual timely, open and transparent way,” he said.

Commentators have long argued that the US weaponises its prized visas to force governments into compliance with its interests or punish perceived wrongdoers.

There has been such a history in Jamaica, with Tapia confirming that action was taken during his tenure against other politicians and people of “substance” in business.

In a former JLP administration, James Robertson resigned as energy minister after his visa was revoked.

The St Thomas Western member of parliament has remained on the backbenches of Parliament since.

“While we understand that the visa revocation under this section of the US immigration laws does not rise to the standard of proven guilt in wrongdoing, Vaz must clarify for the people of Jamaica what circumstances have given reason ... leading to the need for this specific waiver,” said the statement under the signature of General Secretary Dr Dayton Campbell.

He called on Vaz to immediately make full and transparent public disclosure of the circumstances.

“If he refuses to do so, he should either resign or be removed from the Cabinet,” said Campbell.

Yesterday, a multiple-term MP said he would be afraid to travel on the visa issued to Vaz.

“I would not be travelling anywhere with that visa hanging over my head. Every immigration officer is going to look at me with disdain,” said the MP, who asked not to be named.

Similarly, a retired diplomat described the situation as “never seen before”.

MORE ABOUT THE WAIVER

The 212 (A) (2C) (1) US immigration law refers to a visitor who the consular officer or the US attorney general knows or has reason to believe is or has been an illicit trafficker in any controlled substance or in any listed chemical or is or has been a knowing aider, abettor, assister, conspirator, or colluder with others in the illicit trafficking in any such controlled or listed substance or chemical, or endeavoured to do so.